Where are Americans headed if more than half of workers say they have less than $25,000 in savings?

The survey by "the employee benefit research institute" also finds that nearly 30% of workers are "not at all" confident about having enough money for a comfortable retirement. That's a record high.

Researchers point out that many people don't even know how much they need to save for retirement.

That assumes 3% inflation and a 5% annual return on investments.

Financial advisers tell USA Today they're seeing more workers and new retirees with no savings and no plan to get out of debt.

They point to several factors jeopardizing retirement today, including:

Sadly, there aren't many options as you near retirement age and don't have money stashed away.

You can either work longer - which millions of Americans are planning to do - save more or get a higher return on your investments. Or cut your costs.

So much for the golden years.

Here's my question to you: Where are Americans headed if more than half of workers say they have less than $25,000 in savings? 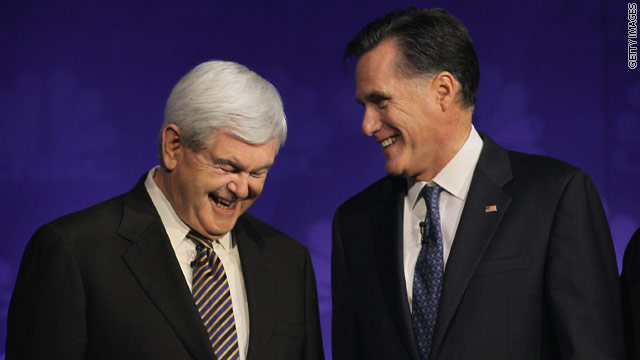 In a presidential election, a lot of things come into play when determining the outcome.

Our country is beset with countless serious problems. For starters, we're broke, we're not creating jobs the way we need to and congress and Washington are a divided, dysfunctional mess.

So every four years we get to listen to candidates who come forward with ideas about how to make our lives better. Like the candidates themselves, some of the ideas are good and others are not.

But at the end of the day, it's often the likeability or the power of a candidate to connect with voters that makes the difference.

On the Republican side, the choice increasingly looks like it's between Mitt Romney and Newt Gingrich.

And one study found some interesting differences between the two men. Democratic pollster Peter Hart has described a focus group of Republican primary voters done for the Annenberg Public Policy Center.

When asked what relative Gingrich reminded them of, several Republicans said a favorite uncle or a grandfather. They described Romney as a "missing father" or a second cousin. Not exactly warm and fuzzy feelings for Romney.

Just one more strike against the one-time presumed nominee.

Meanwhile, Politico reports on the many reasons why Gingrich might win this thing, including:

Romney being forced to play catch-up; Gingrich's message being perfect for the anti-Washington Times; Gingrich rocking the debates, which are drawing huge audiences; the Obama campaign doing much of the anti-Romney work; social conservatives distrusting Romney, and Gingrich has momentum on his side, with the first four states voting in January.