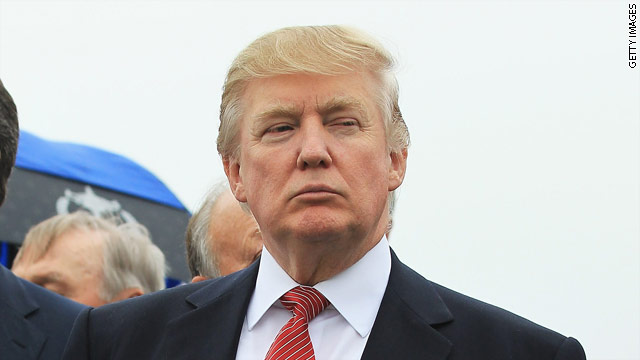 How important is Donald Trump's endorsement?

Donald Trump fancies his endorsement a hot commodity in the Republican race... and several of the candidates apparently agree.

Many of the GOP hopefuls have been making the pilgrimage to Trump Tower here in New York the past few months to meet with the real estate mogul and reality TV star. Just yesterday, front-runner Newt Gingrich became the latest to visit Trump.

In his book, Donald Trump writes that the candidates come to see him "because millions of people listen to what I say and know I 'get it.'" He adds that it wouldn't surprise him if he's the "single most important endorsement a presidential candidate" can get. And just to be clear, Trump says he's not bragging, rather quote "I just tell it like it is."

He says he'll most likely endorse someone - but hasn't said when. Trump flirted with his own GOP run earlier this year... and still isn't ruling out an Independent run.

But not everyone in the Republican race is after a Donald Trump endorsement.

Jon Huntsman probably had the best line of the week - saying he refuses to kiss Trump's ring... or any other part of his anatomy. Huntsman says this is what's wrong with politics, "show business over substance." He adds that if Trump had any courage, he'd still be running for president instead of manipulating the process from the outside. Huntsman recently said he would not attend the GOP debate Trump is moderating.

Ron Paul has turned down that debate as well, saying it would have a "circus-like" atmosphere.

Paul also took a swipe at front-runner Newt Gingrich after yesterday's meeting with Trump. Paul says Gingrich and Trump would have a "wonderful time" shopping together in New York - picking out gifts for their wives. He suggests Tiffany's. I love Ron Paul.

Here's my question to you: How important is Donald Trump's endorsement?

Paul:
In a just world, the endorsement of a much-married, money-grubbing egomaniac should be worth nothing. However, in a country where money not only talks but frequently swears, it may help win the stupid vote.

Doug in Massachusetts:
I think Trump’s endorsement might be good for a New York councilman, in one of the more expensive New York neighborhood precincts, but nothing above that. I like his orange hairpiece though, and he is prettier than Madonna.

Fred:
For those who pander to the American public, having the endorsement of the greatest modern day panderer may be important. For any thoughtful American, it is a source of amusement/despair.

James in Las Vegas:
Jon Huntsman and Ron Paul have answered this question very well. Trump is a self-promoting B.S. artist that has made his money at the expense of his investors in many cases. His endorsement of a Republican candidate should be considered a negative, unless you like the Gong Show.

Mike in Florida:
To the top Republican contender, a lot. To the rest of America, it's a big joke.

S. in Florida:
Very important if you need a room comped at his casino. In the election, not as much.