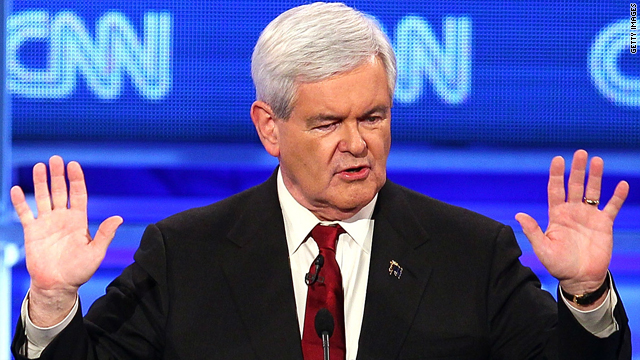 Is Newt Gingrich's momentum for real?

The tea leaves are starting to suggest that Mitt Romney might lose yet again. After being the presumed nominee for the past four years and the front-runner among the Republican candidates for the past several months, suddenly he's breathing Newt Gingrich's exhaust fumes.

Take Florida, where Gingrich has shot to the top of the GOP pack. A new poll conducted for the Florida Times Union newspaper in Jacksonville shows Gingrich at 41% - that's as much support as the next four candidates combined. Romney places a distant second in this Florida poll at 17%.

And Gingrich is coming on strong in several of the early voting states as well. In Iowa, one poll shows Gingrich ahead of Romney by seven points. In South Carolina, Gingrich tops Romney by 11 points.

And in New Hampshire, where the former Massachusetts Gov. Romney is a favorite son - Gingrich is also picking up steam. Romney still leads there, but Gingrich is closing the gap.

Meanwhile Gallup polling shows Gingrich's positive intensity score is the highest of any Republican candidate right now, while Romney's is his lowest of the year.

Washington Times columnist Charles Hurt writes that getting Republicans to line up behind Romney is "like trying to stuff a cat into a trash can ... at least one claw always manages to reach out at the last second and cling desperately to the rim."

Hurt suggests the only thing Republicans can agree upon is that they don't want Romney. But it's too soon to know if Hurt is right or wrong.

Here’s my question to you: Is Newt Gingrich's momentum for real?