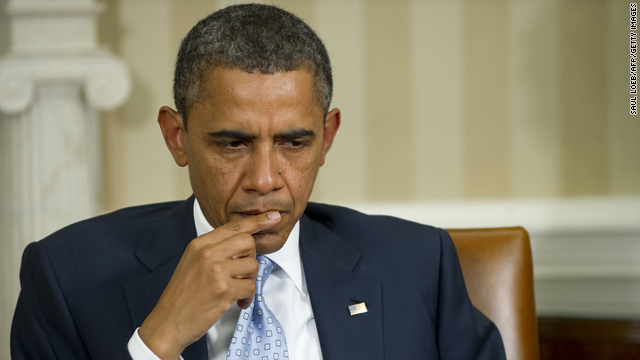 Robert in Florida:
Well, Jack, it’s nice to see CNN is still a valued member of the president’s re-election campaign. Let’s just further divide an already divided country by trying to make this about race. The president is in over his head and people are beginning to realize this administration has only made a bad economy worse. His polices do more to inhibit job growth than encourage it. You can’t keep borrowing money that takes years to repay to create jobs that only last for months. The bottom line is: it’s the bottom of the seventh and we’re losing the game so it’s time to replace the pitcher.

Richard in Texas:
Of course Obama has a chance of winning. Look who his competition is: You have a Republican field which consists entirely of ignorance, arrogance, stupidity and foolishness. This is a slam dunk for Obama and he doesn't even have to get off of the bench. The Republicans will beat themselves. Just give then enough time.

Loren:
We can only hope that he doesn't. While there are some who think racism is involved with whites rejecting President Obama's presidency, I think that it is non-whites who still support the president who are racially motivated. While the president would like to tout that his policies bring hope to the poor, the reality is that those at the bottom continue to suffer and the pool of poor has just gotten larger.

Noel in New Mexico:
I think it all depends on who his opponent is… Given the fact that a proven office holder, ambassador, businessman, and foreign policy expert who looks presidential, Jon Huntsman, is dead last in the polls, I think Obama has a very good chance.

Avant:
Jack, There is a way for Obama to win with two-thirds whites opposing him. Let the Republican nominee be a Mormon.

JD in NH:
Have you looked at the GOP roster? Unless they come up with a viable candidate, Bozo the Clown could win a second term.