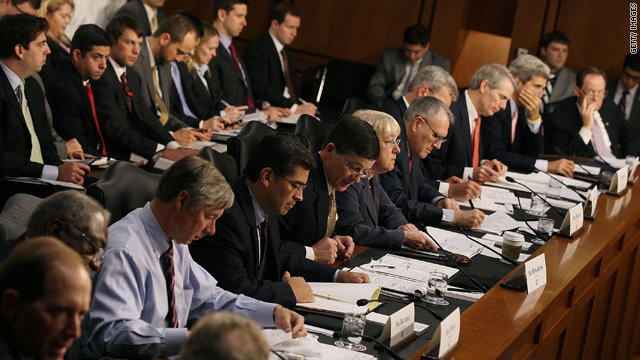 How do you see the super committee concluding its business?

The so-called super committee is turning out to be anything but.

With little more than a week to go before its deadline, things are looking pretty grim for the bipartisan panel tasked with cutting $1.2 trillion from the national debt over the next decade.

For starters, Politico reports the committee has "all but abandoned" its full-panel meetings. Instead, a series of small bipartisan groups now dominate the negotiations.

And the six Democrats on the panel can't even come to a consensus. That makes chances they'll be able to agree with Republicans slim to none.

Plus, key lawmakers are talking about dragging out the process.

They're now talking about a "two-step process" to reform the tax code and entitlements.

The super committee would set a figure for increased tax revenue; but then individual House and Senate committees would have to craft the legislation. In an election year? Yeah, that'll happen.

This is outrageous. If it happens, it would make the super committee just one more group of politicians to kick the can down the road when it comes to our nearly $15 trillion national debt. And we can't afford that.

Oh yeah - and remember that automatic trigger that's supposed to go into effect if the super committee can't agree to cuts? Well, our lawmakers are trying to weasel out of that one too.

One super committee member says it is "very likely" Congress will try to dismantle those across-the-board cuts to defense and entitlement spending.

All the while, both sides are busy trading accusations about who would be to blame if the super committee fails.

Our government is broken, and we are losing the country because of it.

Here’s my question to you: How do you see the super committee concluding its business?

Brandon in Denver:
Failure is inevitable. The job of a politician is not to make good decisions for our country, but to get elected. It speaks volumes when 63% of American voters want to see increased taxes on the wealthy and corporations and six members of the panel will listen to Grover Norquist before their own constituents. They will crash and burn despite the solution being obvious.

Terri on Facebook:
Seriously, did anyone ever expect this microcosm of Congress to do anything the full body couldn't? What a joke. I expect it'll end with a credit downgrade, a Republican cry to change the rules (again), and a big drunken party at taxpayer expense.

Ray in Georgia:
I suspect it will end up just like all the other committees: deadlocked. They will send it back to the Congress where it will linger until after the next election.

Paul:
I actually expect they will reach some kind of agreement close to the deadline in order to avoid those across-the-board cuts. Unfortunately, I also see the results as likely to be watered down, weak, yet lauded as being a 'great achievement' with both sides using it as a prop on the campaign trails. All the while, more credit agencies gather to consider downgrading the country's credit rating.

Frank:
I think they will fail to agree on something. Then they will worm out of the mandatory cuts.

Karl:
I see them dividing the food tab by 12 and putting it on their expense accounts. It's the only thing they can agree on. Other than that, nothing.