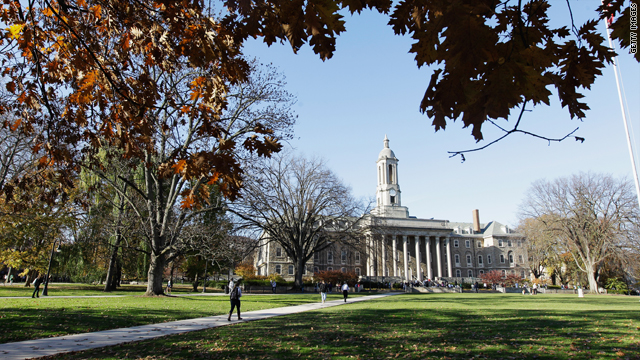 How can Penn State University restore its reputation?

Penn State is having its own Catholic Church moment.

The university has been rocked to its core by the child sex abuse scandal.

A scandal that escalated because those in power seemingly either looked the other way or helped cover up what was going on in order to protect one of their own.

The legendary football coach Joe Paterno was told back in 2002 that a graduate assistant had seen his former defensive coordinator, Jerry Sandusky, rape a young boy in a shower at the football complex. Paterno told his boss, which was apparently all that the law required, but he didn't tell the police.

The university's board is cleaning house, as well they should. They fired Paterno and the school's president, Graham Spanier.

Paterno had wanted to coach the team's last home game of the season Saturday and then resign after the football season ended. You have to give credit to the Penn State board for saying: You're not resigning, you're not retiring, you're fired - get out!

As for the hundreds of Penn State students who rioted on the campus Wednesday night - they ought to be kicked out of school. How dare they act like this because they like a football coach?

These punks are not intellectually equipped to attend an institution of higher learning. How would they feel if it was their little brother who was raped? Their behavior is disgusting and a testament to the outsized role sports plays in American society.

Granted, this is a sad way for the winningest coach in major college football to end a storied career.

But it didn't have to end this way. Joe Paterno himself could have prevented it by applying the same life lessons he preached to his players for 46 years to himself.

Here’s my question to you: How can Penn State University restore its reputation?