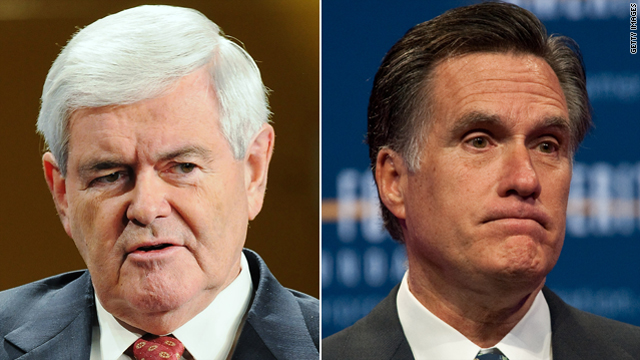 In the GOP race for president, is Gingrich the tortoise and Romney the hare?

Newt Gingrich says he's the tortoise - and Mitt Romney is the hare.

The former House Speaker is comparing the Republican presidential horse-race to Aesop's Fable:

And Gingrich has reason to be hopeful:

He's seen a jump in the polls - along with a spike in his fund-raising - in recent weeks.

Gingrich is now polling in the double digits, which puts him in third place behind Romney and Herman Cain in several national polls. He's also in fourth place in Iowa.

Gingrich believes there's a "big opportunity for an alternative candidate" since Romney seems stuck at about 25% in the national polls. And Cain risks fizzling out with recent sexual harassment allegations. Gingrich thinks there's more room in the race for him.

He has performed well at the eight GOP debates so far, acting the role of the elder statesmen while some of his rivals bickered with each other. He will have another chance when the Republicans again debate tonight.

Gingrich's campaign was left for dead by many in the Spring. Several of his advisers quit after he took two weeks off to go on a Mediterranean cruise.

Meanwhile, this Republican race has been a volatile one - with many conservatives hoping for "anyone but Mitt."

All the while other Republicans held out hope for a candidate like Chris Christie to run.

Here’s my question to you: In the Republican race for president, is Newt Gingrich the tortoise and Mitt Romney the hare?

Rick:
A very good analogy. Gingrich is only being held back by the circumstances surrounding his resignation as speaker, in the past, as well as an occasional silly remark. He has won or tied for the lead, in every debate, his ideas are mostly sound, and his knowledge and experience are unmatched by any other candidate. So, the question is, will the voters recognize that people can change, and will they embrace an older candidate, who still outshines the younger competition?

Brenda on Facebook:
Romney is only the hare because the media has made him that. He doesn't impress me one bit.

Gary in Arizona:
Jack, My boy, you've just hit a home run. They'd make a very good ticket indeed. Romney's business background and Gingrich's political skills could very well clear the mess in Washington as President and VP respectively. I'm signing you up for another season.

Wilhelm:
I think Newt Gingrich has way too much "baggage" in his personal life to ever be the Republican nominee. In the end, Republicans will "hold their nose" and nominate Romney. The Republicans keep looking for Ronald Reagan BUT can only find Ronald McDonald.

Doug in Massachusetts:
No. There is no way the Republican Establishment, is going to let anyone get in the way of Romney losing the election.

Terry in Virginia:
Jack, How dare you insult tortoises and hares by comparing them to politicians? Politicians are snakes, at best, with my apologies to the snakes.