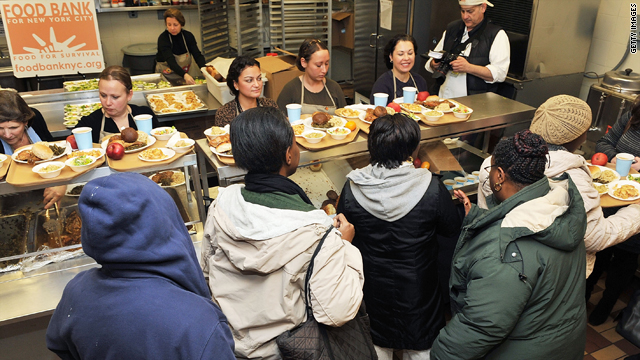 Where is the U.S. headed if 16% of Americans are living in poverty?

Poverty in the U.S. is even worse than we thought it was.

There are almost 50 million people living in poverty. That translates to 16% of all Americans.

The Census Bureau adjusted the official 2010 poverty figures up from 46.2 million, or about 15% of Americans. This new poverty rate takes into account higher costs of living.

Hispanic poverty is the highest of any group at more than 28%.

More than 25% of African-Americans are living in poverty, as well as nearly 17% of Asians and 11% of whites.

The biggest gap in poverty rates is between those who have private health insurance, and those who don't.

Meanwhile, a report by the Brookings Institution shows more than 20 million Americans - close to 7% of the population - are living in extreme poverty.

These people are living at less than half of the federal poverty line. In 2010, that meant an individual income of about $5,500 - or less.

This used to be a place where people came to escape poverty.

According to the Wall Street Journal, almost 15% of Americans are getting food stamps - that's an 8% jump in just the last year. And this number could keep climbing as families struggle under high unemployment - still at 9%.

The hardest hit states include Mississippi, New Mexico, Oregon, Tennessee and Louisiana. In all these states, about one in five residents gets food stamps.

Here’s my question to you: Where is the U.S. headed if 16% of Americans are living in poverty?

Jeff in Hawaii:
It seems everything about the American Dream is broken: Jobs sent overseas, a new unemployment "normal", and a political system so polarized that nothing gets done. It's a scary thought that almost 1 in 5 Americans live in poverty at a time when one party wants to eliminate the social safety net, and the other party has a backbone similar to a Slinky. If we keep on, it can only get worse.

Debbie on Facebook:
We're going to be the new third world, an industrialized nation where almost everyone won't have adequate health care, education...and I could go on.

Mike in Florida:
Jack, America is going downhill fast. The rich are doing great while the rest of us struggle to get by. I wish our Congress had to try to live on ten bucks an hour - if you can even find a job. And the Republicans don’t care about us. I don’t have much hope for our country unless we elect better a Senate and Congress. I'm 60 years old and ready to march on Washington.

Rene:
That's almost 50 million people who will say they're not better off compared to their situation when Obama became president. From a purely political standpoint, this is a big electoral force to reckon with. From a socio-political point of view, it is a destabilizing factor which may undermine the society as a whole and democratic institutions in particular.

John in Georgia:
The 1930s seem like a good place. Think of how great that would be: food lines, large infrastructure projects, films that actually made you feel good, Fedoras and a dollar that could buy a meal for a family of five.