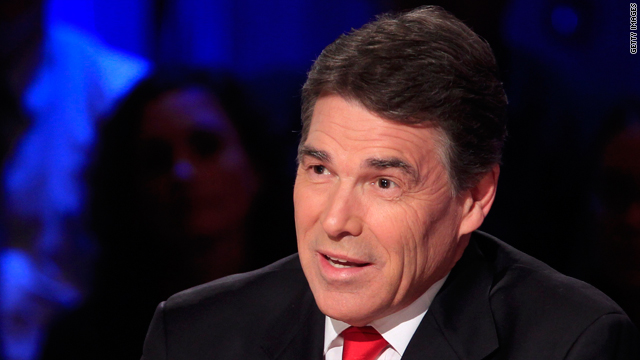 What's at stake for Rick Perry in tonight's debate?

One of the best lines of the campaign so far is: Rick Perry "went from frontrunner to roadkill in a matter of weeks."

Credit the Daily Beast and a fine article titled "What's wrong with Rick."

The article examines the Texas governor's spectacular rise - and fall - in the Republican race for president... and how he still might pull off a comeback.

Headed into tonight's debate, Perry is a distant third in the race.

Our new poll shows Perry at 13% - that's down from 30% and the front-runner position just last month. Both Mitt Romney and Herman Cain now have a double-digit lead over Perry.

So what happened? Well, for starters, the debates happened.

Although Perry is a gifted politician who can work a room or get a crowd excited, he just hasn't been able to hack it during the debates against his more able competitors. Perry also comes under fire for his positions on Social Security and illegal immigration.

Plus, as Perry has stumbled through debate performances, his message of job creation in Texas has been lost. In fact, Perry was practically ignored in last week's debate as most of the focus went to Cain's 9-9-9 tax plan.

But even if Rick Perry seems like a real long shot right now - this is still presidential politics, it's still early, and a lot can happen.

For one thing, Perry has raised a boatload of money: $17 million in just the first 7 weeks of his campaign. And in the game that is presidential politics - money talks.

Then there's this: two-thirds of Republicans say they still may change their minds when it comes to which candidate they'll back.

The Daily Beast column suggests what perry most needs is to return to the street campaigning that he does best. But he also can't keep showing up at these debates and getting his head handed to him. He gets another shot tonight.

Here’s my question to you: What’s at stake for Rick Perry in tonight’s debate?

Carlos in Pasadena, California:
Does anyone really care? And, that goes for the rest of the Republican slate. These so-called presidential candidates are so far out-of-touch with reality that if any one of them becomes president, the Rapture will not only come, the American people will be pray for its immediate occurrence.

Maggie:
Perry should not be worried about his debate performance. He knows that he has the experience to do the actual job, and that's what's more important. Action speaks louder than words. Obama was a good debater in 2008 and look at what a disaster he has been as president. We cannot afford to get pulled into that direction again.

Rex in Oregon:
There is absolutely nothing at stake tonight for Perry. He is spending none of his own money. He has no dignity to lose. His followers are as loyal as any follower could be. He cannot disprove his lack of intelligence any more profoundly. And more importantly, no one in the universe (aside from a few billionaires and misled sheep) give a red-hot damn about his performance, his future, or his hair.

Clinton on Facebook:
I don't think there is much at stake for Perry tonight because he is as good as out of the race already. The more he talks, the more he reminds Americans of George W. Bush.

Tom in New York:
Lots of free time to ponder the science behind the drought, the fires, the ocean’s rise.

Noel:
Not much. He's had his 15 minutes of fame and the best he can do is another 5 minutes. He isn't going to get much more than that. The major league scouts don't recruit from the little leagues.

Jim in New Jersey:
What's at stake? Hershey bars! The ones he's using to dye hair. After tonight he can just eat them instead.