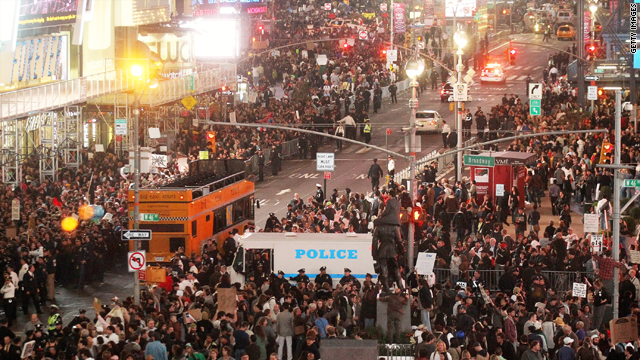 Where are the Occupy Wall Street protests destined to end?

What started with a few people in New York's financial district complaining about the economy and corporate greed has now spread around the world.

And as the Occupy Wall Street movement marks a month of protests, there are no signs of it slowing down.

Protesters have taken to the streets not only in a growing number of U.S. cities, but around Europe and Asia.

This includes cities like London, Rome, Paris, Oslo, Copenhagen, Sydney, Hong Kong, Taipei, and Tokyo. These protests have been mostly peaceful except for Rome, where they set off riots.

Organizers say protests will be held in 950 cities in 82 countries. Sort of sounds like a revolution.

Here in the U.S., police arrested hundreds of protesters over the weekend, including in New York, Chicago, Denver, Phoenix, and Raleigh, North Carolina.

American protesters say they're angry that banks keep making hefty profits after the 2008 bailouts, while ordinary Americans suffer under a struggling economy and 9% unemployment.

They say they take their inspiration from the Arab spring movement that led to the toppling of regimes in Africa and the Middle East.

Critics accuse the protesters of not having clear goal, and they question how long the movement can keep going. But they have lasted a month so far, and the folks who laughed at them don't look so smart now.

Plus politicians seem to be taking note that these protests aren't going away any time soon:

President Obama has voiced support for the demonstrators, and Republican House Majority Leader Eric Cantor - who previously compared protesters to "angry mobs" - now says his party agrees there is "too much" income disparity in the U.S.

Here’s my question to you: Where are the Occupy Wall Street protests destined to end?

Bob:
The people who are protesting have no clear agenda. It seems like a lot of anger but I think it's in the wrong place. It should be at the White House; it is the president’s agenda that is destroying our country.

Ken in Seattle:
It depends to some extent on whether or not they come to recognize their image is getting in the way of their message, which itself is frequently ill-defined. While many of them seem to have good intentions, others seem to be more interested in having a reason to beat their drums and party. And trashing public property does nothing to sway public opinion to support badly needed changes to the way Wall Street is allowed to operate. The exuberance of youth has to give way to an organized disciplined approach to change. They need way more grey hairs in their midst to help them channel their energy and good intentions into something that has broader appeal and greater chance of success.

Stephen on Facebook:
Not enough widespread support? It has spread to 82 countries outside of the U.S. Make no mistake, the little guy has been pushed around long enough.

Bert in Los Angeles:
Hi Jack, I’ve been to Occupy Los Angeles several times and notice a recurring theme in speeches and signs quoting the Declaration of Independence. People say government has become destructive of the Rights it was instituted to secure and it’s our duty to alter our government. Signs reading, “Corporations are not People” and “Money is not speech” indicate an amendment saying so is our destiny.

Jim in Denver:
Jack, I hope it doesn't. The 'rest of us' (99%) need this movement to put pressure on the Tea Party, Congress (both sides) and Wall Street. The Silent Majority is sick and tired of special interests and wing-nut groups that are trying to control this country. Enough is enough.

Jeff in Bishop, Georgia:
Mr. Cafferty, These wacky, disorganized protests will end, and the sissy, counter-culture, hipster miscreants will go back to their communes & parents' homes when winter rolls in.