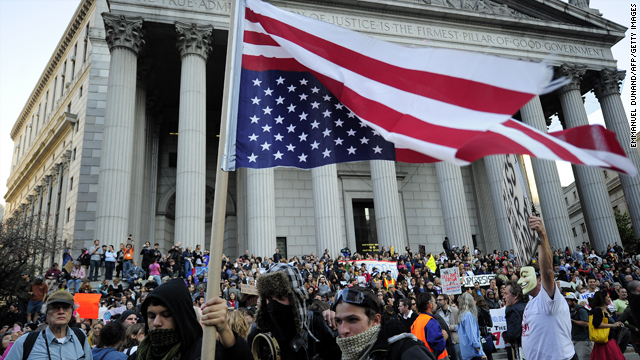 Are the protests spreading across the U.S. the sign of an 'American Spring'?

Today is the 20th day of protests down on Wall Street ... and the movement is picking up steam all across the country.

The demonstrators are critical of the growing economic gap in the United States. They say they take their inspiration from the "Arab Spring" protests that overthrew governments and dictators and continue to cause massive chaos across the Middle East and North Africa.

But in the beginning, barely anyone even noticed. There were a few hundred people with signs, peacefully walking around Manhattan's Financial District, talking about corporate greed and inequality.

And when they were finally noticed, they weren't taken seriously. Reporters made fun of them, saying they didn't even know what they protesting about.

Well, now the unions are joining in and supporting them, and the crowds are suddenly starting to look like this. There were thousands of protesters in Lower Manhattan on Wednesday. There have been hundreds of arrests.

So far, these protests have been peaceful, for the most part. So far. But the more they spread and grow, the bigger a problem it becomes for Washington.

Our federal government should take note. Protests over economic conditions and government cutbacks have turned violent elsewhere in the world. People will only take so much.

Here’s my question to you: Are the protests spreading across the U.S. the sign of an "American Spring"?

Matt in Illinois:
Let's hope so. If we don't become concerned with social justice, we will become a third world country very soon. It is time to "take the keys" back and focus on what we need to do together to restore our standard of living and civility.

Larry in Denver:
Not even close. Without "unity of purpose", it gets cold and it’s over. This is great press, too bad there is no message. Think back to the 60's and Viet Nam. What's the message here? When Americans get cold, they take shelter. Think this will be happening when the wind chill is 15 degrees on a cold November day?

RoseLee on Facebook:
Yes, Jack, they are. People are becoming aware that they sat on their bottoms for too long.

Pat in Michigan:
I believe it is the everyday "worker" saying enough is enough. When we were in school, we feared the playground bullies until one of us stood up to them and found out they were really cowards. It is no different now except the bullies have stolen our retirement money and our politicians helped them.

Sherrie in Indiana:
Hell no, Jack. It isn't a sign of an "American Spring". It's a sign of George Soros. Plus, a lot of grossly ignorant people who appear to believe that we can spin straw into gold.

Summer in California:
Call it what you will. The fact remains that everyday Americans are tired of being put last on the list. We ultimately pay for everything, yet in reality we have little to no say on how our money is spent. The reason you see protests in the streets is because the government has either grown deaf to our pleas or has been rendered so ineffectual that we need to rethink our 3 branches of government. Come what may, I'm glad our voices are finally being heard and the American people are finally doing something about this.

Olga in Austin, Texas:
I wish! I am 70 years old and wish I had the mobility to go out there and walk the streets with them… all of them.