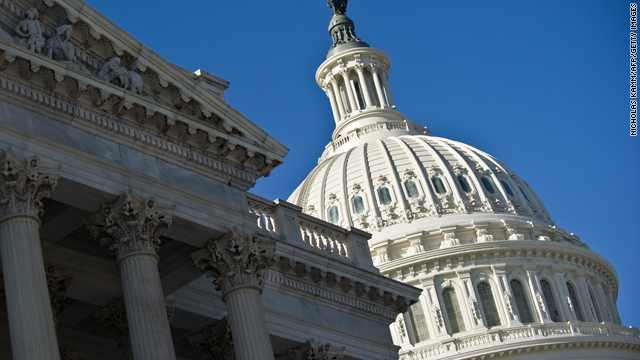 Our government is more badly divided than maybe it has ever been. What's the answer?

The public's trust in the federal government is at an all-time low, which is no big surprise. They're lucky in Washington the citizens haven't marched on the place yet.

There's a new CNN/ORC International Poll out Wednesday that shows only 15% of Americans say they trust the government in Washington to do what's right always or most of the time. Fifteen percent.

Seventy-seven percent say they trust the federal government only some of the time. And 8% say they never do.

Meanwhile, as both parties appeal to their bases and emphasize their differences with the opposition, another new poll suggests what Americans really want is compromise.

The Gallup survey shows for the first time a majority of Americans say it's more important for politicians to compromise than to stick to their beliefs.

Tea party members are the only group in this poll who say it's more important for politicians to stick to their beliefs. Again, no surprise there.

All this comes as the federal government just barely averted another shutdown, this time over a disaster funding bill. Last month, our lawmakers took us to the brink of default on our national debt obligations as they wrangled over an increase in the debt ceiling.

And you can bet when the supercommittee comes out with its deficit-cutting proposals there will be lots more ugly partisanship from our leaders. It seems to be all they know how to do these days.

Here’s my question to you: Our government is more badly divided than maybe it has ever been. What's the answer?

Kim in Kansas:
Read your history books and you will find the answer: Democracies, dictatorships, kingdoms, empires and dynasties have all fallen due to the shortcomings of mankind as a species. If you could eliminate greed, corruption, jealousy, power, sex and money from government, there would still be only the very slightest chance that people in power would do the right thing. In short, our government is the reflection we see in the mirror.

Carolina on Facebook:
Take away all of their perks and put them in a locked building with bread and water until they can come to an understanding of what’s best for the American people.

Marja in Stockholm, Sweden:
You should have many parties like we do in Europe. That way those kinds of situations can be avoided and the possibilities of making compromises are much greater than you have. It really is difficult to understand why the presidential candidates must have millions for their campaigns, for when one gets to the White House, he doesn’t seem to have almost any power at all, because the Congress can sabotage all his propositions of law, if I have understood it right.

Rick:
Intelligent voters. Problem is: most voters are too heavily influenced by the superficial commentary of the liberal media. They don't make any effort to examine what the liberal media publish, for accuracy and authenticity. They are basically too lazy to be voters.

Jayne in New Hampshire:
I am beginning to think we need to officially split into two countries. Let the Republicans and other right wingers enjoy their small government, no health care, no education, no paved roads paradise and allow the rest of us to live our lives in peace with the knowledge our children will be educated, our sick will be tended to and our elderly will be taken care of. I imagine it wouldn't take long before we'd have to build a fence to keep the Republicans out.

Cheryl in South Carolina:
When my friend's kids used to fight, she would make them kiss and hug each other until they laughed. Maybe we should try this with the Democrat and Republican children currently occupying the halls of Congress.