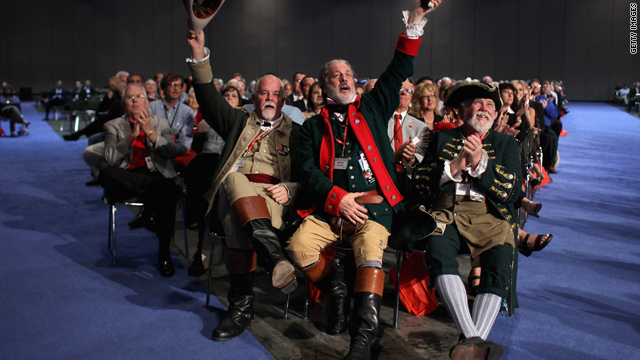 The Republican presidential debates are turning into lively affairs. Maybe too lively.

For the third time in as many debates, crowd members have either booed or cheered at what some say are inappropriate moments.

Most recently, former Sen. Rick Santorum was asked about the repeal of "don't ask, don't tell."

When an openly gay service member asked what the candidates' intentions were for gays in the military, members of the crowd booed loudly.

After the fact, Santorum said he condemned those who booed the gay soldier. He said he didn't hear the boos in the debate hall.

In another debate, Rick Perry was asked about the death penalty and the more than 200 executions that have happened under his watch as Texas governor. The crowd cheered that question.

Another GOP debate crowd got worked up when Ron Paul was asked a hypothetical question about a 30-year-old uninsured man. The crowd cheered when Paul was asked if that man should be allowed to die.

President Barack Obama has criticized the reaction of some of these audience members at the GOP debates; and Vice President Joe Biden calls the booing of the gay soldier “reprehensible.”

Politico asks in an online conversation if the GOP debate crowds are bloodthirsty.

Critics say these debates promote extremism within the Republican Party, and show “the mean season is upon us.”

They fault the candidates themselves for not stamping out the behavior when it happens. They should. Also, some suggest the booing or cheering could turn off moderate and swing voters in the general election. It should.

Here’s my question to you: Are Republican debate crowds bloodthirsty?

Corey in Fort Lauderdale, Florida:
Bloodthirsty? I think they are viciously cold-hearted. I mandate that we change their moniker to the "iced-tea party." The behavior of these debate audiences and the lack of some sort of acknowledgment of inappropriateness by any of the candidates have shocked many of us. The booing of the gay soldier was just the "ice"-ing on the cake. Please stay away from our White House.

Fay in Texas:
It seems so and many of them call themselves "conservative Christians” too. There appears to be a serious disconnect between those Sunday sermons and every day living.

EJ in Houston:
There has been quite a spotlight put on this and rightly so, but the candidates on the stage need to be called out, Jack. Are they all so afraid to upset their base that they would allow them to boo a soldier because of his sexuality, or cheer allowing an uninsured man to die? After it was all over, you hear that "Oh, I didn't hear the booing" or that they condemn that type of behavior. It is like when Sarah Palin claimed she didn't hear all the racial names that then candidate Obama was called at her rallies. It really shows the GOP in a negative light, but the problem is that they don't seem to care as long as they win.

Richard on Facebook:
These are the types of people that would have watched the lions eat the Catholics in Rome. The candidates don't say anything because they are afraid of alienating their base, which are these extremists.

James in North Carolina:
Jack, You have found out our secret. Yeah, we are a bloodthirsty lot. Sometimes we go to KISS concerts when there is not a radical Republican holding a rally. Once we win the election we will be moving on to cannibalism. Right now we have to satisfy ourselves with buffets with medium rare roast beef. Got to go, just saw another UFO fly by.