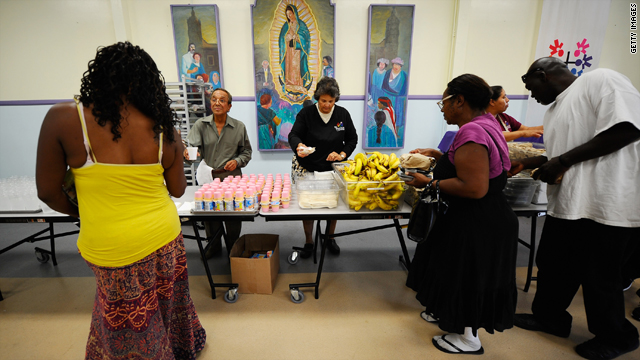 What does it say that most of the 10 poorest states are Republican?

As the Republican race for the White House heats up, here's something the GOP can't be too comfortable with:

Most of the 10 poorest states in the country are Republican.

And the list doesn't even include Texas, where Rick Perry is governor and one in five people lives in poverty.

In a piece on CNN.com, Roland Martin writes Republicans expect to win all 10 of these states in 2012, although President Obama won North Carolina by a slim margin in 2008 and West Virginia is usually considered a Democratic state.

Martin points out that despite the red-leanings in these states, you don't hear so much from Republicans about poverty.

In fact the word "poor" has barely come up at the GOP debates thus far. The only exceptions were:

- Ron Paul suggesting the U.S. get rid of the minimum wage

Overall, Republicans believe their economic agenda is the best way to get people back to work - and many in the GOP are quick to blame President Obama for the rise in the poverty rate.

But how about addressing the root causes of poverty more directly - especially when millions of people in these so-called red states are suffering.

The Census Bureau reports a record $46.2 million Americans are living below the poverty line - which translates to about $22,000 a year for a family of four.

Minorities are especially hard hit - with 27% of blacks living in poverty and 26% of Hispanics compared to about 10% of whites.

Here’s my question to you: What does it say that most of the 10 poorest states are Republican?

John in Florida Keys:
Jack, I think it means those 10 states have more under-educated, down-and-out and desperate folks who are easily influenced by the republican BS. You know, like I'll make gas $2 a gallon when I'm president or there's no such thing as global warming or let's all pray for rain and the best one, it's ok to default on our debt. Yes, we are fast becoming a third world country. Sanity is slipping away.

Joshua on Facebook:
I hope Democrats hammer this point home over and over again until people finally get it. Even the stupid ones.

Mark:
Obviously, it means that even POOR people have enough sense to vote for traditional values and are opposed to the tax and spend policies of liberals... which by the way, do NOT in any way help them leave their poverty status.

James in San Diego:
It’s a preview of what the entire country will look like if the Republicans get back in control of Congress and the White House.

Sandra:
Jack, 1) Possibly the Republicans don't have the best ideas about how to fix the economy and create jobs and 2) Maybe the poor should start looking around for a candidate who actually supports their needs. Apparently, that trickle down thing isn't even working in the Republican states.

Bill in Pennsylvania:
Jack, Simple. You have to be able to think to see through all the 24/7 hate mongers’ propaganda. There is a good reason Rush Limbaugh has a $400 million contract (yes over $400 million). It’s for the radio propaganda he delivers. He delivers followers, the unthinking "ditto heads". Some of them can actually find the polls.

Ron:
It tells me that the 10 poorest states are also the 10 dumbest states.