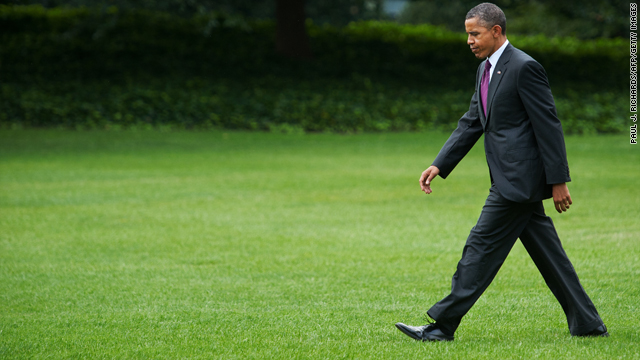 How much do you blame Pres. Obama for struggling economy?

With the Dow tanking nearly 400 points on Thursday, it looks like Americans are more likely than ever to blame President Obama for the sluggish economy.

A new USA Today/Gallup Poll shows for the first time ever a slight majority, 53% of those surveyed, blame this president for the nation's economic problems.

Just in time for re-election.

That number is up sharply from the 32% who felt President Obama was to blame six months after he took office.

The silver lining here for Obama is that Americans blame former President George W. Bush even more than him for the nation's economic woes. But Bush won't be on the ballot next November.

The poll also shows that about six in 10 independents believe both presidents are to blame.

This is not good news for President Obama, with the economy sure to be the top issue in the 2012 race.

Another recent CNN poll shows eight in 10 people think the economy is in poor shape, and less than 40% approve of how President Obama is handing the economy and unemployment.

What's more, only 9% say the president's policies made the economy better.

If it's the economy, stupid – and it always is – the president has a real problem.

But the Congressional Budget Office predicts unemployment will remain above 9% right through the end of next year. Which means it's very likely to become someone else's problem.

Here’s my question to you: How much do you blame President Obama for the struggling economy?

H.:
The president can't do much to help with a "no" Congress. They don't give a damn about jobs or the economy. The Republicans will ruin this country to get elected and people are dumb enough to let them.

Rose in Glendale, Arizona:
I believe that Obama is now more to blame than Bush. Since Obama took office, everything has gone from bad to worse. His policies have not helped the job market at all. In fact I think his policies have done more harm. He acted way too late to make significant changes that could have helped. Instead Washington spent way too much time on the Health Care Bill. Jobs should have come first.

David on Facebook:
Yes, It was a mess he inherited, no question. However, he has displayed zero leadership and has surrounded himself with poor advice, so he does share in the blame.

Mark:
Jack, Where have you been? If a giant asteroid struck the earth tomorrow it would be George W. Bush's fault... just like everything else.

Richard in Malvern, Pennsylvania:
100%, Jack. He doesn't have a clue. He should go back to the faculty lounge where he belongs.