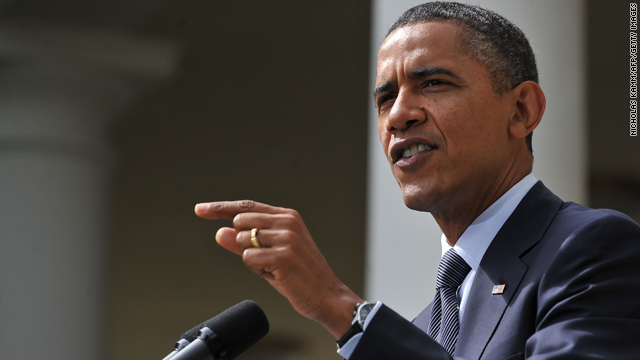 How much of a problem does President Obama have with his own party?

There are a lot of unhappy Democrats these days, and they are setting their sights directly on President Obama.

A group of liberal leaders says they want to field a slate of candidates against President Obama in the primaries. Just what he needs.

Ralph Nader tells the Washington Times that without an intraparty challenge, the liberal agenda will be ignored.

Nader - who has repeatedly been ignored by the voters in presidential elections - says Obama running unopposed will kill voter enthusiasm and that voters won't get to see the real differences between the democrats and republicans.

More than 45 liberal leaders support this idea. They point to President Obama's handling of the Wall Street bailouts, the wars, Libya, the extension of the Bush tax cuts and the debt ceiling deal... just a short list of grievances.

Meanwhile the head of the Congressional Black Caucus says unhappy members of his group would probably be marching on the White House if Mr. Obama weren't president.

Black leaders have been begging the president to address unemployment among African-Americans - which is close to 17%. Almost double the national average.

Finally - one of Mr. Obama's hometown newspapers, The Chicago Tribune, is running a column called Why Obama Should Withdraw.

Columnist Steve Chapman suggests not running for re-election might be a sensible thing for Obama to do.

He says the president might do his party a favor by stepping aside, taking the blame and letting someone else replace him at the top of the ticket. Someone like, oh, say, Hillary Clinton.

Here’s my question to you: How much of a problem does President Obama have with his own party?

Dale:
His 3 years in office have been a lame, disastrous attempt at consensus-building with an ignorant, uncompromising Republican party. He should have learned from the health care 'debate' that they don't care about the American people and are only interested in his failure. By not standing up for the beliefs of those of us who helped elect him, he is in trouble.

Fala in Dallas:
None whatsoever. When liberals look and see who is lining up against him in 2012 (a la Rick Perry) they'll all get in line. They will see the second coming of George W. Bush on steroids, dumber and more arrogant. It's not even three years and we've already forgotten what these Republicans have done. We Americans were dumb enough to reelect Bush and smart enough to elect Obama. I have my fingers crossed.

Harriet in Bayside, New York:
The Democratic Party doesn't really hate President Obama, but many in the party are disappointed in him, because he gives in too easily.

Dave in Orlando:
Let’s count the ways: Obama can give an electrifying speech, but they are all empty. He has not fulfilled any of his campaign promises in any meaningful way - not one. He spent his first year and a half in office working only for himself on what he hopes will be his legacy: health care. He has given the farm away to the Republicans on every negotiating point. He has capitulated to big business, Wall Street and all the other scoundrels after promising to put an end to their shenanigans and criminal activity. He has held no one accountable for anything. We are still waging several wars, not to mention debt and taxes. Need I go on?

Craig on Facebook:
Obama hasn't figured out that he is the head of the party and how to make it work for him yet. How can he lead the country when he can't even lead his own party?

Bob:
As long as I've paid attention to politics, I have never seen a president endure such opposition to each and every thing he does. I appreciate that our president has hung in there and hasn't lost his composure. Honestly, I don't know how he hasn't punched Boehner, Ryan and Cantor smack in the face.