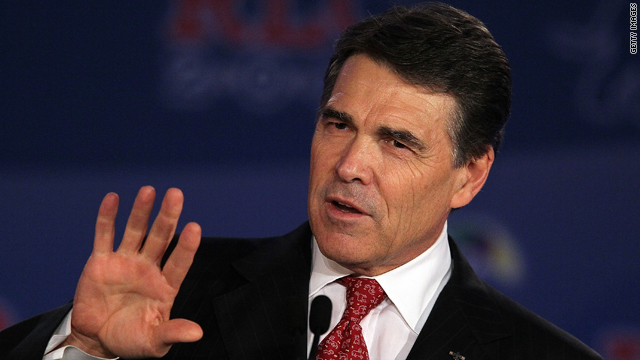 How much will it hurt Rick Perry that nearly 1 in 5 Texans live in poverty?

Rick Perry loves to talk about all the jobs he's created in Texas... but that's only part of the story... and a bit misleading at that.

The other part of the Perry story is that nearly 1 in 5 Texans in the state where he is the governor are living below the poverty line; and that the poverty rate is growing faster in Texas than the national average.

Both demographic and economic factors play into this high poverty rate - more than half the state are minorities and many Texans have little education. Especially in southern Texas, many families live in shanty housing with no electricity or indoor plumbing. In 2011.

Also, the poor in Texas don't get much help. The state has one of the lowest rates of spending on its citizens per capita; and it has the highest share of those without health insurance.

Relatively few Texans collect food stamps - even though many more qualify for them - and receiving cash assistance is difficult. Experts say part of the reason more people don't seek help is the Texas mentality that you should pick yourself up by your own bootstraps.

For his part, Texas governor Rick Perry says creating jobs is the best way to help his citizens. And it's true that Texas has created 40% of the jobs added in the U.S. in the past two years.

But many of these new jobs are low-paying ones. More than half a million workers in Texas last year were paid at or below the minimum wage of $7.25 an hour. That's just $15,000 dollars a year for someone working full-time.

Texas has the highest percentage of minimum wage workers in the country... tying with Mississippi at nearly 10%.

Here’s my question to you: How much will it hurt Rick Perry that nearly one in five Texans are living in poverty?

Tom in Texas:
20% in poverty? It looks to me Perry is cooking the books to attempt to look good. Unfortunately, he apparently believes 20% in poverty is okay. In the decade we've been subjected to him, I believe it's gotten worse. Perry seems to want to reduce the rest of the country to the 20% poverty level he's worked so hard to attain here. Perry is nothing more than George W Bush with some personality.

Laura:
You can afford to live in Texas on lower wages. That's what the NY/DC media don't understand. You may not have noticed that the Bureau of Labor Statistics breaks down unemployment by educational attainment. The unemployment rate for people with no high school diploma is 14.3%. The unemployment rate for people with a 4 year college degree is 4.3%. For which group do you think jobs need to be created? The jobs needed are more of the lower-paying jobs. Perry's state may be creating the jobs that need to be created.

Janne in North Carolina:
Rick Perry is only responsible for the poverty in one state. How much does it hurt Obama that the percentage of Americans living in poverty last year rose to the highest level since 1993? I don't think poverty levels increasing is a fight the Democrats really want to have.

Shannon on Facebook:
I doubt it will hurt Perry in the Republican primaries, because they'll believe anything that he feeds to them. However, it will hurt him big-time in the general election because Independents (like myself) really pay close attention to things like that.

John in Alabama:
Jack, Let's do the math. 20% of the population of Texas lives below the poverty level. One in four Texans lacks health coverage, and the entire state just burned to the ground. I think the Governor of Texas might want to improve the lives of Texans before moving on to bigger and better challenges.