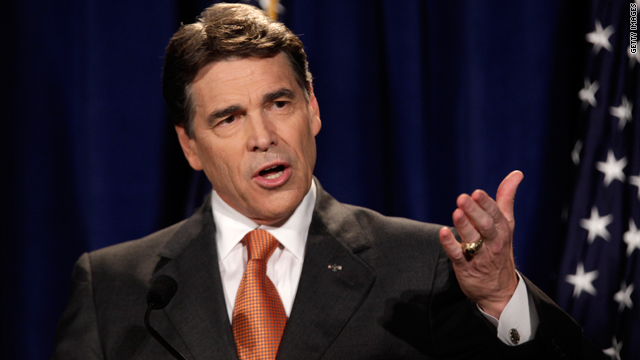 Rick Perry says he can't be bought for 5K. How much will this haunt him?

If Rick Perry wants to be president - he needs to start thinking more about what he says before he says it.

The Texas governor has already come under lots of criticism for saying Federal Reserve chairman Ben Bernanke's actions are potentially treasonous, and for comparing Social Security to a Ponzi scheme.

At Monday night's debate, he stepped in it again... and this time it may be harder to scrape off the bottom of his shoe.

When Michele Bachmann suggested Perry pushed for the HPV vaccine at the bidding of Pharma giant Merck, Perry reponded, "If you're saying that I can be bought for $5,000, I'm offended."

Here's the problem: Perry didn't finish that sentence... he didn't go on to say that he can't be bought at all. and with voters extremely skeptical of the ties between politicians and big business... this is a comment that could haunt Perry for months to come.

Meanwhile, Perry claimed he received $5,000 from Merck, but that only represented their 2006 contributions. In all, Perry pocketed about $30,000 from Merck, the maker of the HPV vaccine.

Merck has also reportedly given more than 3$380,000 to the Republican governors association, or RGA, since 2006... the year that Perry stepped up his role in that group. One watchdog group estimates the RGA has given Perry's campaigns more than $4 million over the last five years.

A Perry spokesman insists the governor's vaccine decision was based only on women's health concerns, saying "What drove the governor on this issue was protecting life and nothing else."

It's also worth noting that Perry's ties to Merck don't end with a check - his former chief of staff was a lobbyist for Merck before and after he worked for Perry.

Open the window. You can smell this.

Here’s my question to you: Rick Perry says he can't be bought for $5,000. How much will this comment haunt him?

END_OF_DOCUMENT_TOKEN_TO_BE_REPLACED

Should President Obama consider not running for re-election?

It had to be a pretty rough morning to wake up to in the White House today.

Democrats suffered two stunning losses in special elections. In both cases, the Republican winners tied their opponents to President Barack Obama and his economic policies.

The most crushing loss came in New York. Democrats lost the seat of disgraced former U.S. Rep. Anthony Weiner, a seat that hasn't gone Republican since the 1920s.

The district, which covers parts of Brooklyn and Queens, is heavily Jewish, Democratic, pro-union and blue-collar.

If this doesn't send the Democratic Party into panic mode, it ought to. The results in Brooklyn bring into question whether Obama can carry Florida next year, a state absolutely crucial to his re-election.

And there's more. The guy who won, Republican Bob Turner, is a retired cable TV executive who has never served elective office. He defeated a Democratic state assemblyman, David Weprin, with two decades of experience in public service.

National Democrats poured in half a million dollars at the last minute and even sent former President Bill Clinton to campaign, but none of that mattered.

Meanwhile, in Nevada - another important state for the president's re-election - the Democrat was trounced in a special election there.

These twin losses are only the latest in a string of bad news for Obama:

A new CNN poll shows Obama receiving the highest disapproval rating of his presidency at 55%.

As for his $447 billion jobs plan, it's looking unlikely that will get much, if any, traction in a divided Congress.

And if the upcoming election is really all about jobs and the economy, the president's campaign could very well be doomed:

The Congressional Budget Office says the economy will grow slower than anticipated and that unemployment will stay close to 9% through the end of 2012.

Here’s my question to you: Should President Obama consider not running for re-election?