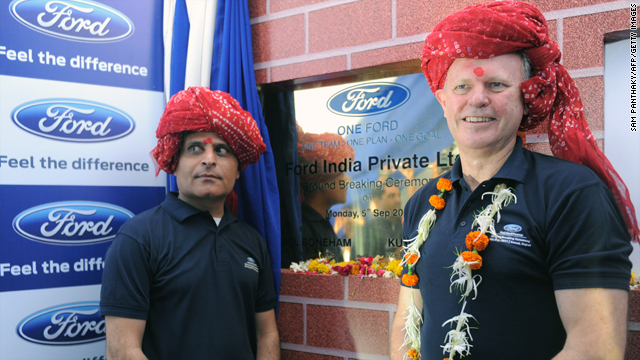 Here's just one more example of where the jobs have gone: Ford motor company says it's broken ground on a $1 billion manufacturing and engineering plant - in India. It will employ 5,000 people when fully operational. In India.

This will be Ford's second plant in India. So far Ford has invested $2 billion in that country. It's also one of seven new plants that Ford is building in China, Thailand and India. It's not unusual for manufacturers to build plants where the customers are... happens all the time.

Ford says the new Indian facility will help them reach the goal of increasing worldwide sales by 50% to 8 million vehicles a year by 2015. They say they're expanding in markets - like India - that have the most growth potential.

And therein lies the problem. People in America who don't have jobs are less likely to buy a new car. As President Obama prepares to address the nation with his jobs plan tomorrow night, the American worker is facing a real uphill battle.

Unemployment is at 9.1% nationally, underemployment is even higher... and last week we learned that there were zero jobs added to the economy in august. Zero.

Here’s my question to you: What message does it send that Ford is opening a new plant (with 5,000 jobs) in India?

Lou:
That we live in a global economy. The company I work for here in the U.S. is from Germany, yet they employ several thousand people here and thousands more in other countries. We're just one link in a manufacturing chain that gets parts and services from other businesses in the US. Global economics is here to stay. Maybe instead of worrying so much about jobs we're losing to other countries we should grow up, and start innovating again. There's a newly emerging world market just ripe for us to sell things and ideas to.

Bob in Bellmore, New York:
The message Ford is sending is the same every big business sends: they are concerned about their bottom line and not American workers or the impact on our country. Big business cares about business and not people.

Lee on Facebook:
We need India more then ever. It's going to be huge! Good job Ford putting the American brand power overseas.

Justin:
That shows progress on Ford’s part. The American society has changed; we are now an information society not a manufacturing society. Why can't we accept this change, and evolve to fulfill this need? Education and training is not an excuse anymore with Pell grants and federal student loans to help with financial burden. We need to evolve to fix the problems in this country.

Jesse on Facebook:
American companies don't care about Americans. Leave everything up to the private sector and you might as well start writing an obituary for the U.S. right now.

Pat in Michigan:
It means we might get jobs working at the help desk for Ford here in America.