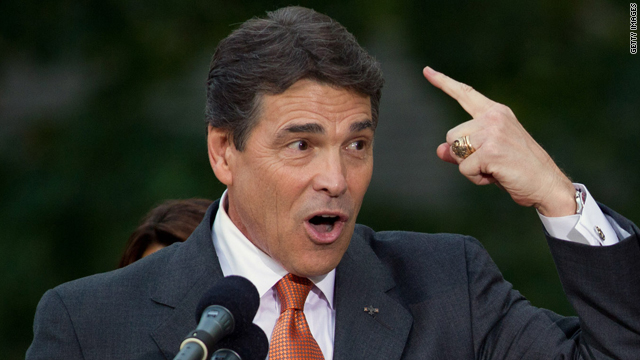 When it comes to politics, how important is hair?

In fact, when he jumped into the race just a few short weeks ago, fellow Texan Paul Begala described it as "when Rick Perry threw his hair in the ring."

Say what you want about the current Republican front-runner - love him or hate him - the guy's got great hair.

Maybe it will help Perry make it all the way to the White House.

In any case, it probably won't hurt him.

In recent memory, especially since when you could see these guys on TV, our commanders-in-chief have been blessed with the good hair gene.

In fact, you have to go all the way back to the 1950s and Dwight Eisenhower to find a bald-headed president.

Even if they go significantly more grey while in office, like Presidents Obama and George W. Bush, our presidents seem to have pretty healthy heads of hair.

Perhaps it's no coincidence that many of those aspiring to the office, like Perry, are blessed with good hair genes, too.

Look at Mitt Romney, or even John Edwards back in 2008.

Edwards reportedly went all out for his hair, spending as much as $400 for a haircut. Wait until he sees the haircut he could get in prison, but that's another story.

The point is: In the age of television, appearance matters. I don't expect we'll elect another bald president anytime soon, which is too bad. There are undoubtedly a lot of qualified bald people out there.

Anyways, all this got us wondering if there's something magical about good hair and politicians.

Here’s my question to you: When it comes to politics, how important is hair?

John in Florida:
Look at some of our more popular presidents: JFK, nice hair. Bill Clinton, nice hair. On the other hand look at Eisenhower. Elected in 1952, won a second term, very popular. Not much hair. Just that button. "I like Ike." Maybe we should just settle for intelligence, honesty and someone that can speak to the American people without babbling.

James:
Hair is very important in politics as the voting public attempts to avoid both snakes and lions. How much a particular candidate looks like one or the other is a subconscious determinate for the electorate. The Founders, knowing this, insisted on leveling the playing field with wigs. Wise men indeed to have all the men look like women.

Mike in Minneapolis, Minnesota:
That's a really good point, Jack. If Michelle Bachmann ran as his V.P. on the promise of $2 a gallon gas and Rick Perry promised a cure for male pattern baldness, the White House would certainly be theirs. Sadly, that's just barely a joke.

Tammie on Facebook:
Maybe that’s why Trump decided not to run. He has a bad hair day every day.

Ken in California:
It seems we are asking what is more important: what is on top of the head r what is in the head? What has been coming out of the candidates' heads of late has been quite hair-raising indeed.

Robert in Paradise, California:
Well the last president who had a receding hairline was Ford and he lost to Carter. Yep, it must matter.

Tony:
All I can say, Jack, is that if "hair" is an issue, it's lucky for you that you're not running for office!