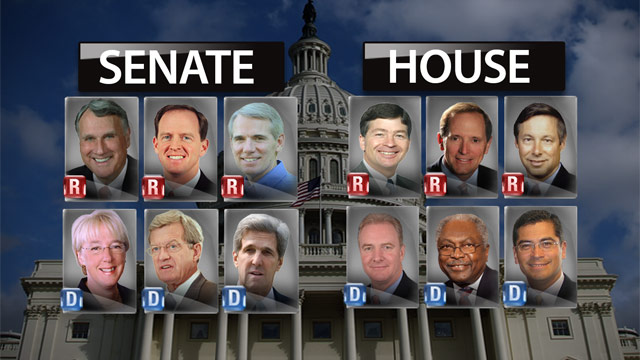 What is the supercommittee waiting for?

The so-called Congressional super committee has a gigantic task ahead: they need to cut $1.5 trillion from the federal deficit in the next decade.

Which means these 12 lawmakers will have to address the politically sensitive issues of entitlement programs and tax increases – all coming up on an election year.

So far, the super committee has done... wait for it... nothing. In fact nobody even knows where they are.

Politico reports these dedicated public servants are enjoying the August Congressional recess along with the rest of Congress and don't plan to even convene until after Labor Day.

Even though their deadline to come up with these cuts is Thanksgiving.

Several of the members tell Politico they're ready to get to work sooner … but don't hold your breath.

One aide says that one of the co-chairs has been reaching out to every member of the committee - but so far those conversations are more introductory than substantive. And no work on cutting the deficit or raising taxes has been done. Nothing.

Critics are putting a lot of pressure on this committee to make sure its meetings are open to the public and transparent.

One committee member says he's "confident we will have public hearings." Really…the same kind we had with the health care reform bill? All done behind closed doors and rushed onto the floor for a vote before anyone had even read it? The law doesn't require the meetings to be open to the public and earlier this year other debt ceiling negotiations were held behind closed doors.

It's your money, but your government would rather you not know what's being done with it.

Here’s my question to you: What is the supercommittee waiting for?

Bob:
Jack, They are busy working on their tans so they can look good in those public hearings they promise. And when they do get around to meeting, I think if you are rich, you will be fine. The rest of us… too bad. The old saying "He who has the gold rules" has NEVER been more appropriate to our "democratic" form of government!

Simon in Orlando:
Like the scarecrow, lion, and tin man in "the Wizard of Oz"...they're still looking for brains, courage, and heart. And the wizard is in Martha's Vineyard.

Tom:
The Republicans have sworn to say, "No!" So it doesn't matter if they never meet. Nothing will come of it. In the Clinton years, we had a surplus. Bush cut the taxes for the rich and we have a deficit. The correct answer to our economy is to end the Bush tax cuts for the super rich, and the Republican answer is, "No!"

Teshia on Facebook:
The Super Committee is waiting for the highest bidder.

Angie:
The Super Committee will wait until the very last minute to present its plan because the longer Americans have to vet it, the more likely it will sink. Washington runs on brinksmanship.

Michael in New Mexico:
It's not a fast food drive up window, it's Congress. Give the souflé time to rise.