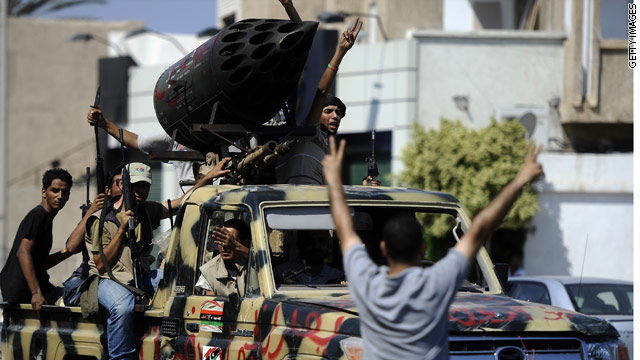 After Gadhafi, what’s next for Libya?

In Libya, as in many parts of the Middle East, getting rid of the dictator is only the first step.

We're talking about people, for the most part, who have lived under oppression for generations and have no idea what freedom is about.

Now that governing will be in their hands, it's a good bet they'll make some mistakes along the way. And, change is not going to happen overnight.

You don't have to look too far for examples.

More than 8 years after Saddam Hussein was toppled, Iraq is still trying to figure out what it wants to be.

In Afghanistan, 10 years after the U.S. went in to knock out the Taliban, the country is pretty much the same disorganized, poverty-stricken collection of tribes that it's always been.

You can probably make money predicting 1,000 years from now it will still be that way... and Hamid Karzai and Barack Obama are not going to change that a whole lot.

Egypt without Mubarak is very much a question mark. Love him or hate him, Hosni Mubarak was a friend of the United States for a very long time and managed to keep the Camp David accords in place.

Since his ouster, the peace between Israel and Egypt has become more fragile.

In Tunisia, the social and economic problems that helped bring about that revolution are still weighing heavily on the interim government.

And now, Libya also finds itself on the threshold of a whole new way of life. In some ways, it's not unlike an inmate being released after serving a long prison sentence.

The world has changed and life without the structure behind the prison walls is frightening and challenging and a lot of them don't make it.

Here’s my question to you: After Gadhafi, what’s next for Libya?