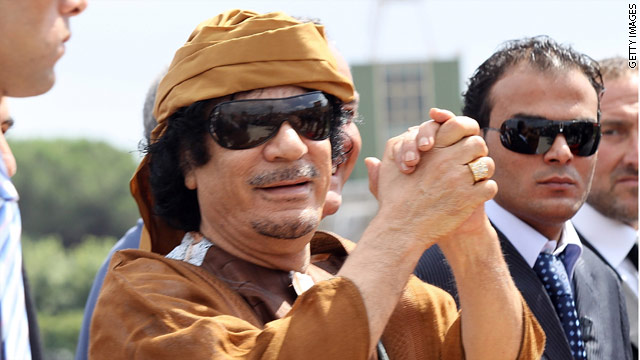 What should happen to Libya’s Gadhafi if captured?

Another day, another Middle East dictator on the verge of falling. Except no one can find him.

Libyan rebels have control of most of the capital city of Tripoli and they say they have three of Moammar Gadhafi's sons in custody.

But the main prize will be Col. Gadhafi, and it's unclear where exactly he is.

Some believe Gadhafi is hiding in Tripoli, while others think he's fled to a neighboring country like Chad or Algeria. The Pentagon says it believes Gadhafi is still in Libya.

If Gadhafi is captured alive – and that's a big if – the question will be what happens to the man who ruled Libya with an iron fist for more than four decades.

The International Criminal Court in The Hague has warrants for the arrests of Gadhafi and one of his sons, along with his brother-in-law, who also happens to be the head of military intelligence.

But it's yet to be seen if the Libyans will want to hand Gadhafi over to the International Criminal Court or administer their own brand of justice. My money is on the latter.

Look at Egypt: Former President Hosni Mubarak is standing trial for the crimes committed against his own citizens. It’s unusual for an Arab leader to be called to account by his own people.

There are surely millions of Libyans who would like to see Gadhafi brought to justice. Think Saddam Hussein. Since taking power in a 1969 coup, Gadhafi has destroyed any and all opposition, even sending hit squads to shoot down Libyans in exile. He called them "stray dogs."

Gadhafi has also been tied to some of the most notorious terrorist atrocities worldwide before the 9-11 attacks, including the bombing of Pan Am Flight 103.

Here’s my question to you: What should happen to Libya's Moammar Gadhafi if he's captured?