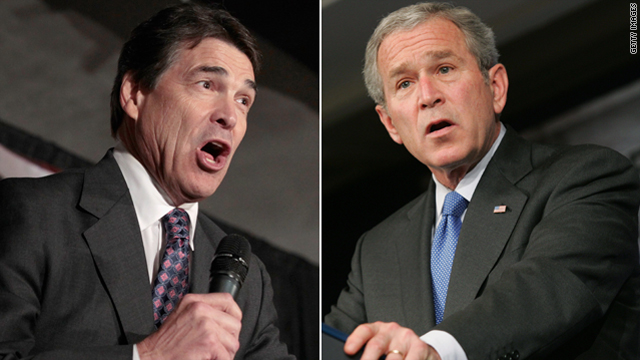 How would you compare Rick Perry to George W. Bush?

It's hard not to compare Rick Perry to the last Republican governor from Texas who made it all the way to the White House: George W. Bush.

Both men are conservative and religious... and neither is what you would call a scholar.

But as Texan author James Moore writes on CNN.com, "If Perry and bush had been born in the same family, W would have become known as "the smart one."

Bush went to Yale - Perry to Texas A&M. He got Cs and Ds at a place Paul Begala calls "this cute remedial school we have in Texas."

Oh yeah, and both were cheerleaders at school. How weird is that? Very.

Both were in the service... Bush in the Air National Guard and Perry in the Air Force.

When Bush got out of the guard under a cloud of suspicion that he failed to fulfill his entire obligation, he went on to fail in the Texas oil business before becoming a multi-millionaire off the Texas Rangers.

Perry headed straight from the military to the family cotton farm and stayed there for seven years before entering Congress. Since being elected to that job, he hasn't made a dime in the private sector. His checks have all come from the government.

By the way, neither one of these men are cowboys, but they like to pretend... like little boys who put on cowboy hats and boots and stomp around like they're on the set of the TV show "Bonanza."

Differences? As Governor, Bush was known for reaching across the aisle, whereas Perry was the opposite.

Also, Bush pushed ideas and policies he didn't necessarily believe in but were politically expedient... Perry on the other hand believes what he's selling and has been described as looking on compromise "as a kind of terminal cancer."

Lastly - seems like there's not much love lost between the Bush and Perry camps - The Daily Beast reports that Karl Rove and his operatives appear to have launched a campaign to derail Perry's bid for the White House.

Here’s my question to you: How would you compare Rick Perry to George W. Bush?

END_OF_DOCUMENT_TOKEN_TO_BE_REPLACED 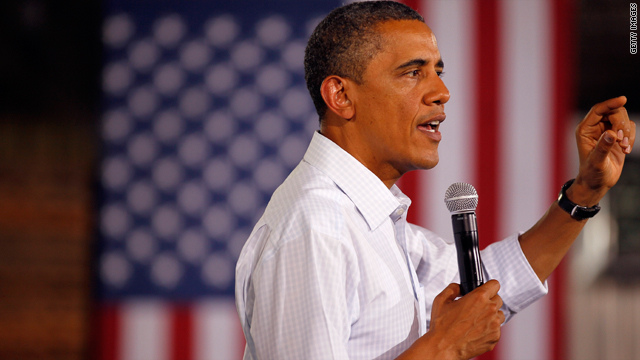 Should another Democrat challenge President Obama for the nomination – and if so, who?

With the 2012 campaign well under way, the Republican candidates are out there daily tripping all over themselves and each other to win their party's nomination. As the incumbent, President Obama is expected to be the Democratic nominee. But what if he's not?

However - there are other bleak signs on the horizon for President Obama. His job approval rating continues to decline, hitting a new low of 39% for one 3-day period last week according to Gallup.

And Americans are increasingly unhappy with Mr. Obama's handling of the economy - the number one issue in the country.

According to Gallup, he gets a lousy 26% approval rating on the economy, 24% for his handling of the federal budget deficit and 29% for job creation. These are terrible numbers.

As if to confirm them, Morgan Stanley was out with a report this morning that says the United States is "dangerously close" to a recession in the next 6 to 12 months.

President Obama says he has a plan for job growth... but he's waiting until after Labor Day to tell us.

Why is he waiting? The unemployment rate is 9.1%. Do you suppose there are millions of Americans who would like to know how the government will create jobs now? Not after the President's vacation to Martha's Vineyard.

We do know the president hopes to extend the payroll tax cut and unemployment benefits; spending additional hundreds of billions of dollars we don't have.

Here’s my question to you: Should another Democrat challenge President Obama for the nomination – and if so, who?