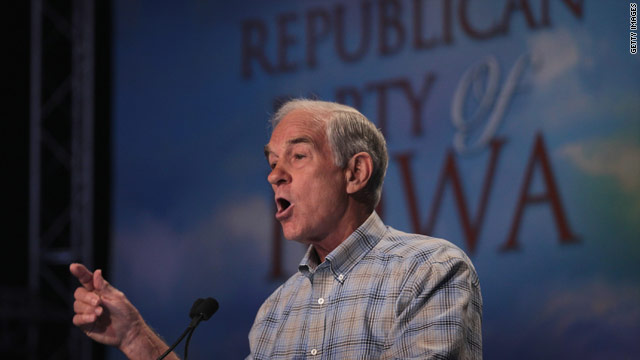 Ron Paul only grown-up running for president in GOP?

As the race for the Republican nomination heats up, there's one candidate who's been largely ignored by the mainstream media.

But Ron Paul is talking sense and more people ought to listen to him.

The Texas congressman has visionary ideas about where the country ought to be going and what sea changes are necessary in order to continue being a superpower.

When Paul ran for the Republican nomination in 2008 – he talked about the economy imploding, the untenable nature of the national debt, the eventual destruction of our currency and a limited role for government.

He showed tremendous fund-raising ability and had an absolutely rabid base of support. The problem was – it was too small.

In the four years since then, many of the things Paul warned us about have happened: We're deeper in debt. The dollar is worth less. The federal government is increasingly dysfunctional, and the country is more divided than at any time maybe since the Civil War.

Yes, Ron Paul is a conservative. But he's not one of those who hits you over the head with his bible. And looking at the current batch of republican wanna-bees, he stands out as maybe the only adult in the room.

In politics as in life, it's often the timing that makes the difference. In the case of Ron Paul, it seems events over the last four years have finally caught up with the candidate.

Paul's message hasn't changed – but the urgency of what he's saying has increased. And it seems like this time, more people may be listening.

He came within an eyelash of finishing first in the Iowa straw poll. Less than 200 votes behind Michele Bachmann out of nearly 17,000 cast.

Michele Bachmann has no chance of being the next president of the United States. Maybe Ron Paul should be.

Here’s my question to you: Is Ron Paul the only grown-up running for president on the Republican side?