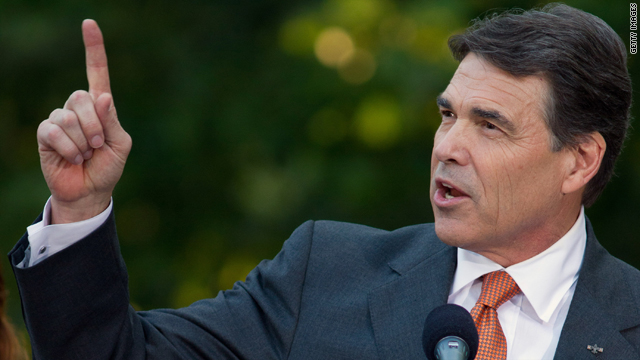 Doug in Miller Place, New York:
Jack, We have over 300 million people in this country. Are you telling me that the best candidates we have to offer are Obama, Romney, Bachmann, and now this guy Perry? It's a sad, sad state of affairs. My brother lives in Texas, and he tells me that Perry's intelligence makes Bush look like a Nobel laureate.

David in Missouri:
Absolutely, Jack. It’s not that I don't like Obama. It’s that I don't want to live in a socialist country crushed by a government that knows what is best for me whether I like it or not. So I will vote for Rick Perry so that I can be free.

John in Cedar Rapids, Iowa:
Of course not! But many will buy Perry's look and high energy. Substance need not apply.

Karen on Facebook:
Oh yes, let's vote him in because Texas only has 8.2% unemployment and 10% of all jobs are minimum wage. That sounds like the solution America needs to the economic crisis: "Read my lips...no new Texans"!

D.:
Judging by how much this man is hated by every facet of the left wing, including most of the comments here, I say: Yes, I am buying what he's selling. There's nothing I love more than seeing loony lefties go crazy over what anybody on the right says or does or thinks. I say to Rick Perry, "Do not back down."

Mia:
Buying? I wouldn't take it if he was giving it away!

Karl:
No thanks, Jack, I'll pass. I don't want to over-fertilize my lawn.

Oscar:
Perry is an incompetent narcissist from a backwards state. I predict he will be our next president.