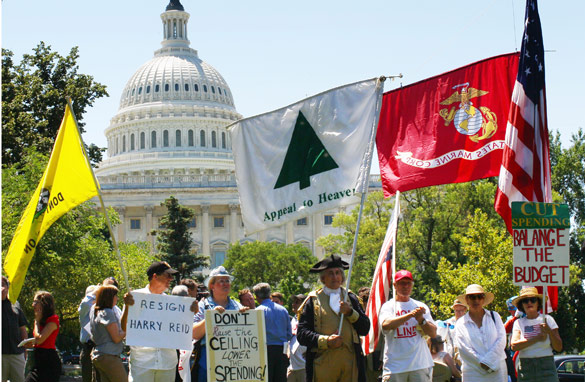 The old saying is you can't fight city hall. The country's city hall is Washington, D.C.

And the frustration being felt by Americans with that city is palpable. We are lied to, pandered to, taken advantage of and taken for granted. And election after election, we watch the quality of our lives and our country continue to ebb away.

Most of us feel powerless to do anything about it.

Love them or hate them, they are making a difference, changing the debate. When the conservative faction of the Republican Party was formed, it subscribed to a set of principles that, surprise, it continues to cling to today.

Tea party movement members said they would go to Washington and work for smaller government, lower taxes, less spending and a general disengagement of the federal government from our everyday lives.

Now granted, their recipe for success doesn't appeal to everyone.

But the point worth making here is this:

It is possible to fight Washington. They just finished doing it with the debt ceiling fiasco. The government was brought to its knees and made to look absolutely silly by a small group in the House of Representatives – just 60 out of 435 members.

They came to Washington and did exactly what they said they would do. That doesn't happen often in Washington.

But there is a lesson here for all of us:

Vote in enough numbers for the people you believe in and can trust, and who knows what might be possible.

Here’s my question to you: What's your impression of the effect the tea party has had on the federal government?