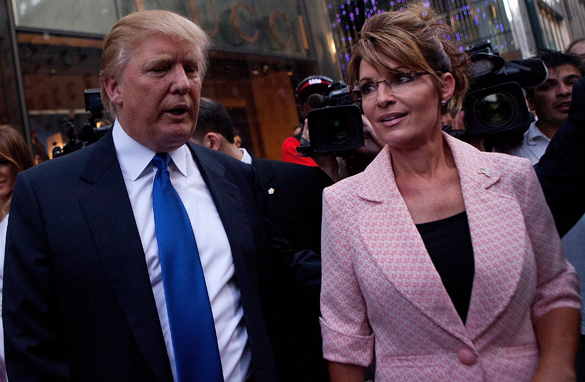 With the 2012 election sneaking ever closer, there's still a chance Sarah Palin and Donald Trump might throw their hats in the ring. Which would tend to fit nicely with the political insanity we've been experiencing the past couple of weeks.

Nevertheless, he tells CNBC he would give it "very, very serious thought," adding, "there are so many people wanting me to do it." That list would fit on a cocktail napkin.

We've been here before. Trump flirted with the idea in the past, including this year, before deciding against it. At the time, he blamed many of the economy's problems on "foolish leaders" who let countries like China steal American jobs.

As for Sarah Palin, she'll be keeping herself in the spotlight when she headlines a tea party rally near Des Moines, Iowa, over Labor Day weekend.

The "I quit after half a term" former governor of Alaska says the U.S. needs a "restoration of all that is good and strong and free,” whatever that means.

The September appearance will mark Palin's second in Iowa this year. In late June, she and her husband, Todd, attended the premiere of the pro-Palin documentary "The Undefeated."

Meanwhile, turns out that film has been soundly defeated at the box office. The movie, which opened nationwide mid-July, earned a lousy $5,000 this past weekend, the worst performance yet. The popcorn stand at the theater took in more.

Palin recently said she plans to decide about 2012 in late August or September. God help us.

Here’s my question to you: Are Sarah Palin and Donald Trump the answer to the country's problems?

D.:
The only thing that Palin should do in Iowa is pick corn. Speaking of corn, Trump has plenty of it and should confine his ego-boosting behavior to the private sector. We already have too many egos in Congress, and we are trying to live with the results.

Richard in Kansas:
If our problem were economic prosperity, a united populace and a firm grip on reality then yes I'd say they were the answer.

Ken in California:
This is like the circus, where the clowns keep coming and coming out of that small car.

Claudia in Buffalo, New York:
Light bulb jokes could be written about these two. Neither has any clue about the interdependence of the world's economies, the needs of 'real' Americans such as the elderly and poor, the heartbreaking and desperate needs of the unemployed when US corporations (rich in cash) will not hire, or the disastrous situation too many Americans find themselves in when they are denied or can not afford health coverage in the richest country in the world. They are however the answer to every late night comic's dreams.

Sandi on Facebook:
If Palin and Trump are the answers to this country's problems, I'm in the wrong country.

Don:
I thought about this a lot but I think Donald Trump should run with Paris Hilton. Of course Paris would be on the top of this ticket.

Ram:
This is one useless topic. Mr. Cafferty, you need to take a break.