Do you buy government's so-called solution to debt ceiling crisis? 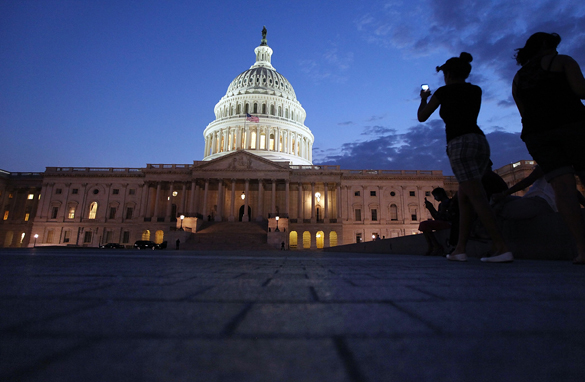 Look closely and this so-called "deal" on the debt ceiling crisis is a triumph of sleight-of-hand over substance.

Sunday night it was, "We will cut a trillion dollars in the first 10 years." By this morning a trillion had become $917 billion, which means we lost $83 billion in cuts overnight. Makes you afraid to go to bed.

In the first three years of the Obama presidency, the deficits will total about $4.2 trillion. Cutting $917 billion over 10 years, or $91 billion a year, is chump change.

Then there's the commission, another one. Remember the commission President Obama ordered to come up with answers to this stuff last year?

They did. Their report was full of a lot of good ideas. It was ignored by the president and Congress. But they want us to believe this commission will be different.

Baloney. There has been no attempt to address tax reform or entitlement reform. That will be left for "The Commission." My guess is they won't touch it anymore than the current crop of folks tackled it. And without those two things, we are doomed.

Supposedly there will be triggers in the legislation that will require additional cuts totaling $1.4 trillion across the board if the committee and Congress cannot agree. Color me skeptical.

We are facing more than $61 trillion of unfunded liabilities from Medicare, Medicaid, Social Security and other obligations - $61 trillion.

There is no money to meet those obligations and our government knows it. But they have the unmitigated gall to march out Sunday night as though they had found a cure for cancer and expect us to break down in uncontrolled adulation. They make me ill.

Here’s my question to you: Do you buy the government's so-called solution to the debt ceiling crisis?

END_OF_DOCUMENT_TOKEN_TO_BE_REPLACED

Has debt ceiling crisis altered your perception of Pres. Obama?

While the U.S. may avert a debt ceiling crisis - and that's still very much an open question - the president might not be so lucky when it comes to a political crisis of his own making.
[cnn-photo-caption image=http://i2.cdn.turner.com/cnn/2011/images/08/01/art.obama.debt.jpg caption=""]
Critics on the left and the right are slamming President Obama for how he has handled the debt ceiling crisis.

An article in the Daily Beast called "Obama Gives it All Away" suggests this is the lowest moment of Mr. Obama's presidency. It claims he's "ushering in a Conservative era" by simply handing over the keys to the Republicans.

The debt deal has also complicated the president's liberal support - you know, the people he'll be relying on to vote for him next year. Many in his own base believe President Obama has given up on one issue after another and ditched his supposed priorities.

As one Democratic Senator tells Maureen Dowd of the New York Times, "We are watching Obama turn into Jimmy Carter right before our eyes." Doesn't get much tougher than that.

Singer and activist harry belafonte says that President Obama and his mission have "failed" because he lacked "a certain kind of moral courage."

And in the Wall Street Journal, Peggy Noonan writes that President Obama is "A loser. and this is America, where nobody loves a loser." She's right. She points out that even at their lowest points - Presidents Clinton and George W. Bush had supporters who still "loved them," but not so for Mr. Obama.

It's no surprise that President Obama's poll numbers are headed down; and according to a new Gallup daily tracking poll, he's hit an all-time low approval rating of 40%.

Here’s my question to you: How has the debt ceiling crisis altered your perception of President Obama?