How much do you rely on the U.S. postal service? 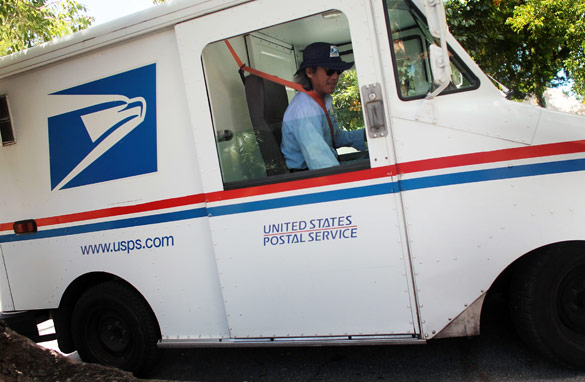 The post office is in big trouble, and today the United States Postal Service announced it's planning to close nearly 3,700 post offices in 50 states and in Washington. The closings will occur mostly in rural areas and involve outlets that don't get a lot of foot traffic. The closings would save $200 million.

The move shouldn't come as a surprise. The postal system has been bleeding cash for years. The volume of first-class mail has dropped 28% in the past four years as more Americans send e-mails and pay their bills online. Last year, the U.S. Postal Service had an $8.5 billion loss, that's compared with a loss of just $3.8 billion in 2009. Things aren't looking any brighter this year. Last quarter, the U.S. Postal Service lost $2.2 billion.

But many people in the communities set to lose their post offices are up in arms. The postal service says "village post office" kiosks will be created in grocery and convenience stores in the next year to fill the voids in these towns. You'd be able to buy stamps and mail packages there. And that may be the future of post offices. The postal service plans to review half of its existing 32,000 post offices over the next 10 years for possible closure just to stay afloat.

Legislation proposed in Congress could provide more help to the ailing agency. It would relieve the agency of paying into a retirement fund for future retirees' health benefits, and it would reduce mail delivery to five days from six. That would save an additional $3 billion annually. But that still may not be enough.

Here’s my question to you: How much do you rely on the U.S. postal service?

Is Pres. Obama more concerned with reelection than with the country's welfare?

After listening to his speech last night, you gotta wonder: Is President Obama more worried about the U.S. defaulting on its debt obligations? Or is he more worried about being re-elected to a second term in 2012?
[cnn-photo-caption image=http://i2.cdn.turner.com/cnn/2011/images/07/26/art.obama.2012.jpg caption=""]
The president says he wants a deal on the debt ceiling, but he's been unable to bring both parties together to agree on anything– even after days of closed door meetings. Republican House Speaker John Boehner walked out on talks with President Obama this weekend. He said he won't negotiate with the president anymore and instead he will work directly with Senate Majority Leader Harry Reid. There's a match made in heaven.

The president is in trouble. For starters, a lot of the people who elected him in 2008 aren't so pleased with the job he's doing. An ABC News/Washington Post poll out today shows the number of liberal Democrats who support Obama on his jobs record has dropped from 53 percent last year to below a third. And the percentage of African Americans who feel the president has helped the economy and the jobs situation has plummeted from 77 percent to barely one-half.

One recent poll showed that any generic Republican would beat President Obama by eight percentage points if the election was held today. I don't know if you've noticed, but the current Republican field of presidential candidates leaves a lot to be desired.

Senator Bernie Sanders, an Independent from Vermont, said he thinks it would be a good idea for President Obama to face some primary opposition as we get closer to the election. The last incumbent president to face primary opposition was ... ready? ... Jimmy Carter.

Here’s my question to you: Is President Obama more concerned with his reelection than with the welfare of the country?