Should smoking be banned in public? 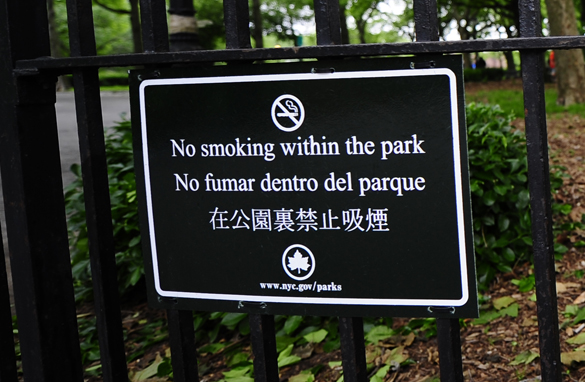 Fewer than one-quarter of American adults are smokers, meaning they've had at least one cigarette in the last week. That number has been dropping for years. And while they may be a shrinking minority, when smokers light up, people who don't smoke take notice.

Over the past 10 years or so, as study upon study has revealed the long-term danger of smoking and exposure to secondhand smoke, smokers are finding they are welcome in fewer and fewer places.

Now comes a new Gallup Poll that shows a majority of Americans, 59%, support a ban on smoking in all public places. That's the highest percentage in the 10 years since Gallup starting doing the poll.

Twenty-seven states have passed tough smoke-free laws. A new law in New York City prohibits smoking in just about any public place, including beaches and outdoor plazas. And increasingly tough laws are in the pipeline in cities and states across the country.

While the growing majority of Americans don’t want to be around people who are smoking, they aren't pushing for an all-out ban on the behavior. Only 19% say smoking should be made illegal. That percentage has been relatively unchanged over the past five years.

But suffice it to say the battle between smokers and nonsmokers will likely continue. And for now, nonsmokers seem to have the upper hand.

Here’s my question to you: Should smoking be banned in public?

Julieanne in Connecticut:
No, it should not be banned. "Being in public" means that you are willing to deal with the habits of others, even those habits which you find offensive.

David in Herndon, Virginia:
Absolutely. Why isn't smoking considered to be battery? The definition of battery is "harmful or offensive touching." Secondhand smoke has been shown to be harmful, and it touches everything around it.

Walter:
No. I am a former smoker, and I feel that the places where smokers can smoke have been narrowed to the extreme. If they are outside, in the open, not bothering others, they should be left alone. We still have freedoms and we have taken enough of them.

Rich in Texas:
Jack the federal government gets $1.01 per pack of cigarettes sold in America. The average state tax on cigarettes is $1.44 but varies from 17 cents in Missouri to $4.35 cents in new York. That is a lot of tax revenue generated and a lot of jobs that would be lost if cigarettes and other tobacco products were banned.

Ed in California:
I don't smoke or really drink for that matter. I don't mind the addicts smoking in public, but not in restaurants. There's nothing wrong with being polite. So no, Jack, smoking doesn't have to be banned. I just hope the smoker can be considerate about their addiction.

Dan:
Absolutely Jack! We don't have enough government intervention in the lives of our citizens yet. Let's keep going until we all end up prisoners in our own homes with all the doors and windows shut tight. I'm just sayin'.