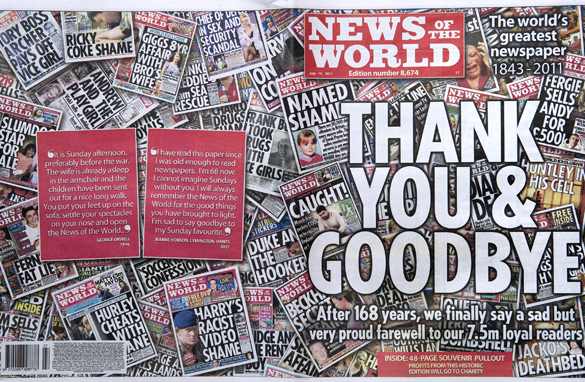 Ken in Seattle:
It is hard to believe that the kinds of grievous criminal activities Murdoch's minions allegedly engaged in over so long a period of time could possibly be limited to Britain. He has the reputation of being a hands-on manager so one has to believe he knew what was going on. If he is amoral enough to conduct business in such a despicable manner there he must have done the same in the U.S.

David in Tampa, Florida:
Yes, Jack. Not what they print so much as how they obtain information.

R.S. in Detroit:
Every inch of Rupert Murdoch's criminal empire needs investigating. This is a powerful organization with its tentacles in everything, further corroding our political system.

Janice in Fayetteville, Arkansas:
Yes, they should start with Fox News. I do not believe it was a coincidence that their web site was hacked a few days ago with a report of President Obama's death.

Chika in South Africa:
Jack, between you and millions of us, we will want nothing more than a thorough investigation of Murdoch's so called "media empire." Question should have been: Do you think the American Government has the courage to investigate Rupert Murdoch and his companies? That guy, Murdoch, acts as if he is "untouchable."

Anne:
The Murdoch empire is corrupt. It always has been. He and his cronies don't even bother trying to hide it anymore – case in point: Fox "News." If the public doesn't demand some clarifications – through a government enquiry- then we are complicit in allowing one man's delusions of power to erode our society. News Corp has done so much damage already, we owe it to ourselves society to prevent them from doing more harm.

Dennis in Florida:
It sounds like a very good idea. I am sure that some of the middle manager types that received raises and promotions for promoting those activities in the U.K. shared the methodology with their U.S. counterparts. It's called corporate culture, and as usual it stinks.