How do you see the debt ceiling issue being resolved? 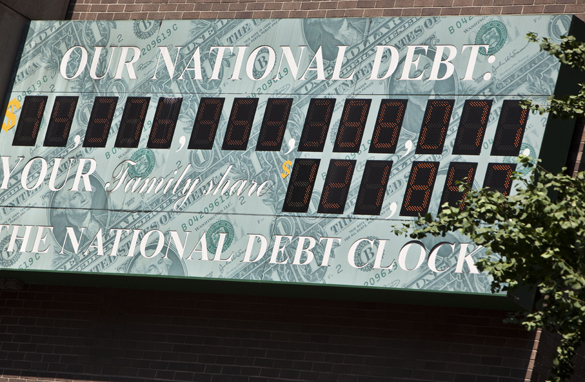 President Obama and Congressional leaders from both parties met behind closed doors at the White House this afternoon to discuss a deal on the debt ceiling - the second time in two days. All parties are still pretty far apart.

And the clock is ticking...If they don't reach an agreement by August 2nd, the U.S. could default on some of its loans...and that could send stock markets tumbling, shoot interest rates sky high and cause the dollar to plummet. Both sides in the debate know this. Right now it seems to be a game of chicken - who will blink first. But this time the stakes couldn't be much higher. And it will be interesting to watch the head-on collision between politics and the reality of default. They're juggling hand grenades here.

The president has ruled out signing a short-term extension of the federal debt ceiling. And with just a few weeks left the rhetoric more resembles school yard trash talk than statesmanship. If you're not worried about the outcome of this, you probably should be.

Here’s my question to you: How do you see the debt ceiling issue being resolved?

END_OF_DOCUMENT_TOKEN_TO_BE_REPLACED

Treasury Secretary Geithner: Hard times for some time to come. Is he right?

The secretary of the Treasury has an ominous warning for the American people: It's going to take awhile for this economic recovery to feel like a recovery, and for a lot of people, it's going to be "harder than anything they've experienced in their lifetime - for some time to come."

Timothy Geithner made those comments Sunday on NBC's "Meet the Press," in the wake of an outright ugly jobs report for June. The U.S. economy added just 18,000 jobs last month - just dismal - and the unemployment rate went up to 9.2%.

Not very encouraging, especially if you're one of the more than 14 million Americans who are jobless in this country right now. Millions of jobs don't exist here anymore. They've been shipped overseas where labor costs are much less, meaning corporate profits are much higher. But what about the country?

There are 4.6 unemployed Americans for every job opening out there, according to the Labor Department. In some states, it's much worse. In Arizona, for example, there are 10 job seekers for every opening.

What's more, nearly 20% of personal income in the United States is now provided by the government - in the form of jobless benefits, Social Security, food stamps and other programs.

The Great Recession officially ended in June 2009, but many Americans haven't gotten back on their feet. They can't find work. Job growth has been slower since then than after any recession since the Great Depression. And for a lot of average Americans times are tough.