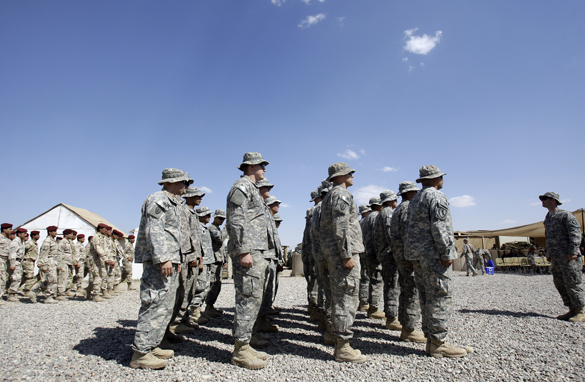 Tom:
Jack, aren't you tired of the U.S. providing the world's security? The U.S. should have departed Iraq sometime ago. The U.S. should cease protecting the world unilaterally. Time for all other nations to participate with manpower and funds. The U.S. and Britain are the principal nations opposing tyrants. Why does the United Nations continually ignore their role to provide for a secure world?

Marvin in Polo, Missouri:
Definitely not. The Iraqis are quite willing and capable of killing each other without our troops, money and weaponry. Wish them good luck, and bid them farewell.

Patricia:
It may be necessary to leave some troops, but the majority will be brought home. This is no big deal. Circumstances control what he does and for me he has made good decisions on the war.

Mel in Houston, Texas:
No, unless the leader of Iraq gets on local TV and makes a public request for the U.S. to stay a longer period of time. Possibly a speech before their Parliament so that the citizens of Iraq can see that the U.S. is not an occupier.

Donald:
Please don't leave any troops in Iraq. Let that region's history unfold as it will. Ditto with Afghanistan. Get on with governing an America which puts its own citizens first, and concentrates solely on bettering the home country for everyone who lives there. In case you hadn't noticed, while you were wasting trillions on useless wars, America has fallen into a deep pit of overspending, foreclosures and unemployment.

Shawne:
I feel the U.S.A. needs to get most of the troops out of Iraq as soon as possible. What is the President thinking? This huge budget mess we are facing in this country is highly due to the wars in Iraq and Afghanistan. How can they even think of cutting Social Security, Medicare, etc. from our seniors and disabled citizens at the cost of these wars? I am 60 years old and feel my future is very uncertain.

Terry in Chandler, Arizona:
How many ways do I need to respond with "No" for my reply to be read on air Jack?