Why is America becoming nastier?

When former Utah governor and U.S. ambassador to China Jon Huntsman announced he is running for president earlier today, he promised a campaign of civility. Huntsman told the crowd, "I don't think you need to run down anyone's reputation to run for president."
[cnn-photo-caption image=http://i2.cdn.turner.com/cnn/2011/images/06/21/art.nasty.jpg caption=""]
We'll see how long that lasts.

According to a new survey on civility and behavior in America released exclusively to Politico,com, 85% of Americans think politics in this country has become increasingly uncivil. And nearly three-quarters think things will get nastier as we get deeper into the 2012 presidential race. That's probably a pretty good bet.

But it's not just politics where America's gotten nastier. Eight-six percent of Americans say they have been treated uncivilly recently - most commonly while driving or shopping. Sixty percent say they themselves have been rude to someone else.

Also in the survey, Americans were asked to rank 25 U.S. institutions from least civil to most civil. Political campaigns were the least civil, followed by pop culture, then the media, government and at No. 5, the music industry. But the sixth least civil institution? The American public. Seventy percent of those surveyed said the public wasn't civil.

And that says a lot about our society. If we can't treat each other nicely, how can we ever expect to get this country back on its feet?

Here’s my question to you: Why is America becoming nastier?

END_OF_DOCUMENT_TOKEN_TO_BE_REPLACED

Why are there more U.S. troops on South Korea's border than on our own border? 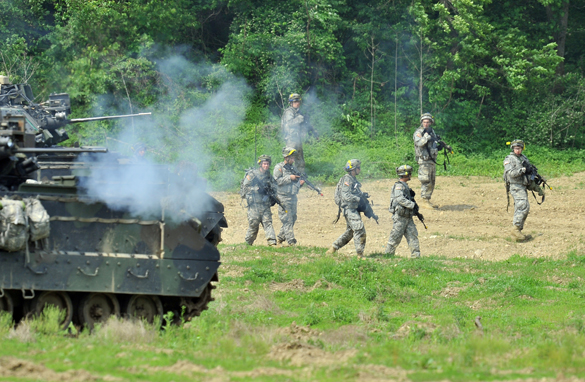 The 1,200 National Guard troops deployed along the U.S. border with Mexico will stay in place until September, a Homeland Security spokesman said late last week. The troops were scheduled to leave June 30th. But a sheriff in southern Arizona calls the move "pandering" on the part of the Obama Administration. That number, he says, falls far short of what's needed to keep the country safe.

Sheriff Paul Babeu of Pinal County in southern Arizona went on to compare the number of troops we have along the U.S. border with Mexico to the more than 28-thousand U.S. troops stationed along the South Korean border with North Korea. The 1,200 guardsmen aid a little more than 20-thousand border agents along the Mexico border, and it's just not enough. For Babeu, who has been named Sheriff of the Year by the National Sheriffs Association, illegal immigrants, drug smuggling, and human trafficking are commonplace in his county. He knows what's needed to protect the border and it's far more than the federal government has been willing to do.

The sheriff's statement comes at a time when Senator John McCain is under fire for some comments he made about immigration over the weekend. After touring the scene of the devastating wildfires in his state, McCain told reporters that there was "substantial evidence" that some of the fires were caused by illegal immigrants. McCain went on to say, "The answer to that part of the problem is to get a secure border."

Senator Jon Kyl and Congressmen Jeff Flake and Paul Gosar, also Republicans from Arizona, released a joint statement backing up what McCain said. But immigrants' rights groups have jumped all over McCain, accusing him of using illegal immigrants as scapegoats.

Here’s my question to you: Why are there more U.S. troops on South Korea's border than on our own border?

END_OF_DOCUMENT_TOKEN_TO_BE_REPLACED

Cafferty: Why would NBC edit Pledge?