Should Congress cut off funding for operations in Libya?

Questions continue over President Obama's decision to send U.S. forces to Libya. Whether or not he complied with the War Powers Resolution, or if he even needed to.
[cnn-photo-caption image=http://i2.cdn.turner.com/cnn/2011/images/06/20/art.cap.bldg.jpg caption=""]
The president says he didn't.

Either way, lawmakers didn't have much say in the matter - and 90 days into the conflict, they still don't. But what they do have a say in is how much money can go toward a military operation like this one.

And House speaker John Boehner– who has said repeatedly that the president was in violation of the Vietnam era resolution - says the House could cut funding for U.S. military involvement in Libya when it takes up a defense appropriations bill later this week.

On the Sunday talk show circuit, two Republican Senators - Lindsey Graham of South Carolina and John McCain of Arizona - both said they oppose cutting funding and warn that it could hurt NATO efforts in the region. Outgoing Defense Secretary Robert Gates also said cutting off funding in the middle of a military operation is always a mistake.

Gates also said he thinks that this conflict will "end okay" but he could not make a prediction as to how long it would last or when Moammar Gadhafi would fall.

But for a number of lawmakers the eventual outcome as well as the decision to go into Libya are beside the point. Last week, a bipartisan group of 10 House members filed a federal lawsuit challenging Obama's decision to send U.S. forces to Libya.

This is far from over.

Here’s my question to you: Should Congress cut off funding for operations in Libya?

END_OF_DOCUMENT_TOKEN_TO_BE_REPLACED

Why would NBC edit out part of the Pledge of Allegiance before the U.S. Open? 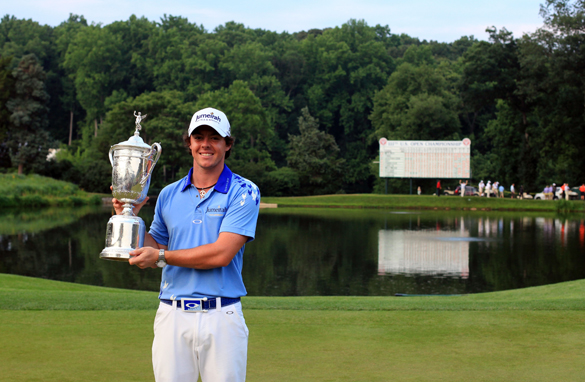 A 22-year-old from Northern Ireland won the U.S. Open Sunday at Congressional Country Club outside Washington. It was a stunning performance. It's too bad the same can't be said about NBC, the network televising our national championship.

At the beginning of the telecast, NBC aired a patriotic montage featuring video clips of national monuments and soldiers raising an American flag, cut around a group of school-aged children reciting the Pledge of Allegiance. Only during the pledge, the phrases "under God" and "indivisible" were edited out, twice. The piece was supposed to play up the whole patriotism theme with the golf course hosting our national championship so close to our nation's capital and all. But a lot of people couldn't get past the missing lines. Who does this?

Angry viewers immediately took to Twitter bashing NBC and suggesting a boycott of the network. Others called into their NBC affiliates to complain. And before the broadcast ended, announcer Dan Hicks issued an on-air apology of sorts, saying the omission was not meant to upset anyone and that the network was sorry to those who were offended. It wasn't nearly enough.

"We are aware of the distress this has caused many of our viewers and are taking the issue very seriously. Unfortunately, when producing the piece - which was intended to capitalize on the patriotism of having our national championship played in our nation's capital - a decision was made by a small group of people to edit portions of the Pledge of Allegiance. This was a bad decision."

The network also said if disciplinary action is taken, it will be handled internally and not be made public.

The original Pledge of Allegiance, of course, did not include the words, "Under God." They were added by Congress in the 1950s. As a result, they are as much a part of our salute to our flag as the rest of the words in the pledge. And it boggles the mind that a bunch of morons at NBC can take it upon themselves to decide which part to include and which part to omit. Those responsible ought to be fired on the spot.

Here’s my question to you: Why would NBC edit out part of the Pledge of Allegiance before the U.S. Open?