What does it mean that the housing crisis is now worse than the Great Depression? 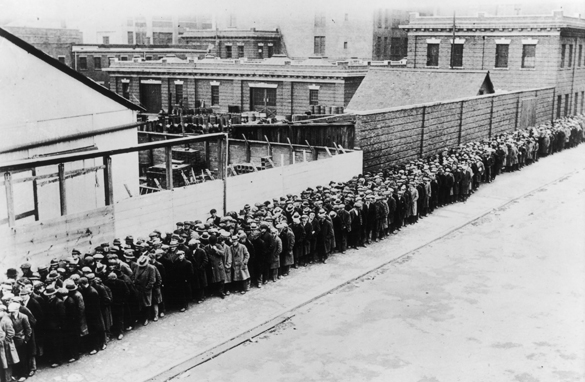 A long line of unemployed and homeless men wait in New York to get free dinner at the municipal lodging house during the Great Depression, circa 1930. (PHOTO CREDIT: GETTY IMAGES)

Here's a sobering thought: A new report from Capital Economics describes the current housing market bust as, "larger and faster than the one during the Great Depression."

Analysts point out one of the reasons we're in worse shape today is that the boom that came before the dramatic downturn was unlike anything this country saw in the years leading up to the Great Depression. This time around millions more Americans had access to the housing market, and many of those people wound up buying homes they couldn't afford despite having bad credit, or putting little or nothing down.

Foreclosures were down last month, but that may say more about the banks than the people who can't pay for their homes. Banks have been having trouble selling the homes they've already repossessed, so there's little incentive for them to continue the pace of foreclosures.

Additional data out in the last few weeks show nationwide prices are at their lowest level since 2002. What's more, almost one-quarter of all homeowners are underwater, meaning they owe the bank more than their home is worth.

A recent CNN-Opinion Research Corporation poll found that 48% of Americans believe another Great Depression is likely to occur in the next year. Sadly, for a lot of people, it already has. There is a bright spot in all of this. It's a great time to buy a home with rock bottom prices and mortgage rates near historic lows. The problem is so few of us can afford one these days.

Here's my question to you: What does it mean that the housing crisis is now worse than the Great Depression?

END_OF_DOCUMENT_TOKEN_TO_BE_REPLACED

Why is the Republican presidential field such a yawn?

Scintillating is not a word I would use to describe the current field of Republican candidates hoping to challenge President Barack Obama in 2012. Stultifying is more like it.
[cnn-photo-caption image=http://i2.cdn.turner.com/cnn/2011/images/06/16/art.repubs.jpg caption="(L to R) Former Massachusetts Governor Mitt Romney, Texas congressman Ron Paul, former Minnesota Governor Tim Pawlenty."]
So far, former Massachusetts Gov. Mitt Romney has emerged as the front-runner. But that may not last, and he's already lost this race once. The universal health care plan that passed in Massachusetts on his watch, which has been compared to "Obamacare," isn't helping him. Neither is the criticism that he has trouble talking to "real" Americans. Some say that being a practicing Mormon could hurt him, too.

But the other candidates aren't exactly dazzling GOP voters either.

There was buzz about U.S. Rep. Michele Bachmann's performance the other night at the CNN debate and former Minnesota Gov. Tim Pawlenty seems to be campaigning his heart out, but so far neither is likely keeping Obama up at night. Rick Santorum is barely registering on voters' minds. Lack of experience is hurting former pizza CEO Herman Cain. And U.S. Rep. Ron Paul, who has a small and devoted following, likely will find out the third time is not a charm.

People don't know too much about Jon Huntsman, who is going to announce he's running next week. He was a very popular governor in Utah, but he was also the ambassador to China under Obama until he resigned earlier this year and he, too, is Mormon. Texas Gov. Rick Perry may throw his cowboy hat in the ring soon, too, and some say he could shake up the field. But so far, it's been a snooze.

Even voters from the candidates' own states aren't excited. According to a report on Politico.com, polling data show most of the current candidates have higher unfavorable ratings than favorable ratings in their own states. And some would not even be able to win their states in a general election. 'Nuf said.

Feet to the fire, come November 2012, most Republican voters will pull the lever for whichever candidate represents their party, no matter how dull or charismatic, but if independents and frustrated Democrats don't get excited about the candidate, Obama's a shoe-in for a second term.

Here’s my question to you: Why is the Republican presidential field such a yawn?