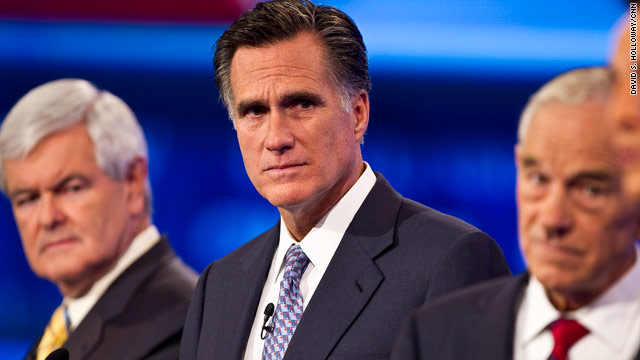 Will Republicans have to lighten up on social issues in order to succeed in 2012?

Each of the Republican contenders in last night's CNN presidential debate tried to set himself - or herself - apart from the other candidates, but their main message was more about beating President Obama in 2012 than each other.

With the president's approval ratings near all-time lows, our national debt sky-high and climbing, and unemployment above 9%, it would certainly seem it's the Republicans’ race to lose.

According to a CNN Opinion Research Corp. poll, nearly three-quarters of Republicans and Republican-leaning independent voters say they want a real contender who can defeat Obama in 2012, even if that nominee doesn't agree with them on every issue. More importantly, that's up 7 percentage points from January.

But for Republicans to keep conservatives happy, social issues - like abortion, gay marriage, "don't ask, don't tell" - still manage to work their way into the conversation. And that may prove to be a problem for Republicans once we head into the general election campaign.
|
For example, former Pennsylvania Sen. Rick Santorum said on Sunday's "Meet the Press" that not only was he pro-life even in cases of rape and incest, he believes that doctors who perform abortions should face criminal charges. Santorum should save himself a lot of time and money and find something to do besides running for president.

On the subject of gay marriage, all the candidates except Herman Cain and Ron Paul said last night they'd support a constitutional amendment outlawing it. Several of them also said that if elected, they would go back to the military's "don't ask, don't tell" policy. Note to the GOP: These are not the issues that middle America is worried about. They would like to be able to find a job.

Here’s my question to you: Will Republicans have to lighten up on social issues in order to succeed in 2012?

Brian in San Diego:
Absolutely. These are fringe issues where the majority of the country simply does not agree with the far right. Perhaps more importantly, the voters in this election, regardless of where they stand on the political spectrum, expect the candidates to focus on the economy and the deficit. Anything else the candidates focus on is a waste of their time and their potential votes.

Dennis in Florida:
Even though the economy is horrible, the Republicans will have to soften the ultra conservative stances. Similarly the Democrats will need a middle-of-the-road message. The average person doesn’t want the extremist right or left positions jammed down their throats.

C.:
The moderates like Romney will pretend to be staunchly pro-life, Pawlenty will say what a glowing president Palin would be, until after the nomination. Then, they'll revert to their true centrist views if they want to win.

Richard in San Diego:
How often can you say smaller government, lower taxes, no regulations? Last night’s debate, and I use the word debate lightly, showed that if they don't discuss social issues, then they have nothing to say. No ideas to improve things except trying what has already failed. I don't know about anyone else but if you have two roads and one is a dead end I don't drive down the dead end again.

Jim in Bartlesville, OK:
They definitely should, but I do not think they will. It will cost them the votes of 30-something voters like my adult children, and I believe it will also cost them the election. I am a conservative Republican, and totally frustrated that Republican candidates do not understand, it’s the economy, stupid!

Bob:
They will not succeed. They cannot get away from cultural wars; they cannot run away from Private Ryan. With candidates like Romney the Mormon, Huntsman the Mormon, T-Paw flip-flop, Newt the philanderer and the rest of them, they are going no where.