Should U.S. continue raids to capture or kill terrorists in Pakistan?

We now know that the United States had contingency plans in place for military action against Pakistani forces if they had tried to stop the raid on Osama bin Laden's compound last week that resulted in his killing.
[cnn-photo-caption image=http://i2.cdn.turner.com/cnn/2011/images/05/10/srm_pakistan_map_lil.jpg]
Just another indication that despite the billions we've given Pakistan over the past decade to help combat terrorism, we didn't fully trust their commitment to finding bin Laden or any other high profile terrorist who might be living and plotting and scheming within their borders.

The relationship between the United States and Pakistan is deeply strained now. Pakistani Prime Minister Yousuf Raza Gilani has warned the United States that his country's military will respond to any future U.S. raid.

Gilani said in a speech Monday, "Any attack against Pakistan's strategic assets, whether overt or covert, will find a matching response."

Sen. Dianne Feinstein, Democrat from California and chair of the Senate Intelligence Committee is now questioning the U.S.-Pakistani relationship and the amount of aid we send that country, $20 billion over the last eight years. She says that relationship makes "less and less sense."

But two other top leaders from the Senate Intelligence Committee, Sens. John Kerry, Democrat from Massachusetts, and Dick Lugar, Republican from Indiana, are defending U.S. aid to Pakistan.

Pakistan has nuclear weapons. Trying to figure out what to do about our relationship with them isn't easy.

Here’s my question to you: Should U.S. continue raids to capture or kill terrorists inside Pakistan?

END_OF_DOCUMENT_TOKEN_TO_BE_REPLACED

Should Arizona be allowed to enforce its own immigration law? 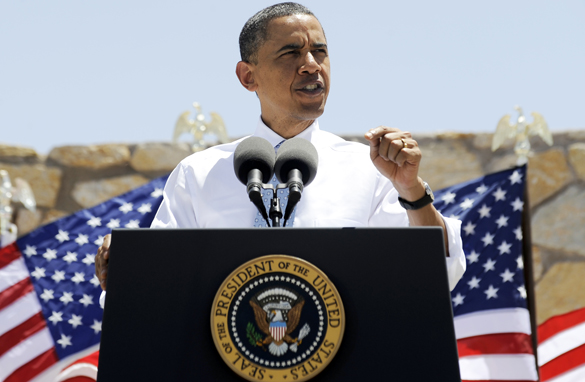 You can tell there's an election coming. President Obama traveled to El Paso, Texas, to deliver a speech this afternoon on immigration reform. He talked about the economic benefits of immigration overhaul and about increasing the number of border guards from the days of the Bush Administration. Of course, he stopped short of talking specific immigration legislation.

Because of the federal government's refusal to secure this nation's borders, many states have taken it upon themselves to pass their own legislation.

Arizona passed a controversial illegal immigration law last year. It requires police officers to investigate the immigration status of any person they stop who they think may be an illegal immigrant. The law also makes it a crime to not carry immigration paperwork while in the state. You know, just like you're required to carry a driver's license if you drive a car. The U.S. Department of Justice sued to block the Arizona law and won. A three-judge panel of the U.S. 9th Circuit Court of Appeals found the law to be unconstitutional. But Governor Jan Brewer said yesterday that Arizona will appeal directly to the U.S. Supreme Court. The Supreme Court is already set to rule in a case on another Arizona immigration law in the coming weeks, one that dissolves businesses that repeatedly knowingly hire illegal aliens.

If it wins the case, Arizona will need some help enforcing this new law on its own. Which is why it is asking for public donations to fund its legal defense of the law and to construct a fence between Arizona and Mexico. And it's getting them. So far, the state says the response has been very positive. The people of Arizona are tired of waiting for Washington to enforce the federal immigration laws already on the books.

Here’s my question to you: Should Arizona be allowed to enforce its own immigration law?