The White House has pictures of Osama bin Laden's body. But we're not sure when or if we'll see them.
[cnn-photo-caption image=http://i2.cdn.turner.com/cnn/2011/images/05/03/art.obl.jpg caption=""]
A senior U.S. official tells CNN that the White House received three sets of pictures on Monday: One set of bin Laden's body at a hangar in Afghanistan where it was flown after he was killed, one set from bin Laden's burial at sea aboard the USS Carl Vinson and one set from the raid in which he was killed, showing the compound and several corpses - including one of his sons - but no pictures of bin Laden at the scene where he was gunned down.

The tricky part for the White House is that the picture that includes the most recognizable image of bin Laden's face has been described as extremely gruesome and graphic. It reportedly shows a massive open bullet wound across both of his eyes. It's very bloody and not exactly acceptable for the front page of a newspaper or a morning television show. But whether to show it is a decision that should be made by the newspaper editor or the morning show producer.

Most Americans want to see the pictures anyway. More than half of Americans, 56%, say the United States should release a picture of Osama bin Laden's body, according to a new CNN/Opinion Research Corp. poll. Just 39% say it should not be released.

The other consideration is whether releasing the picture would further inflame Muslim extremists and members of al Qaeda. It probably would, but how much madder could they get? Bin Laden is dead, gunned down in his house by United States Navy SEALS. They're probably already pretty steamed.

A final decision on the photos has not been made, but there is "growing consensus" to release them. A decision could come as early as Tuesday.

END_OF_DOCUMENT_TOKEN_TO_BE_REPLACED

With the death of Osama bin Laden, do you feel safer from terrorism? 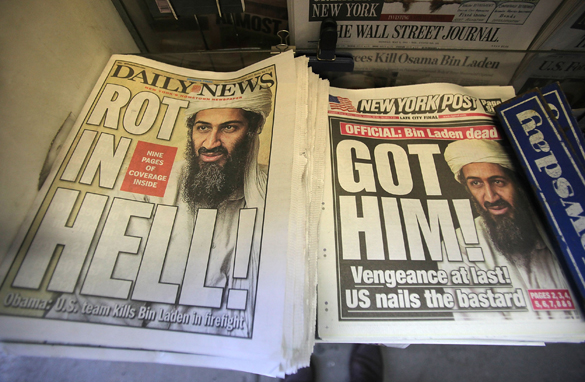 In the wake of the killing of Osama bin Laden, law enforcement agencies in cities like New York, Washington and Boston have stepped up security on the streets, in airports, and at other transportation hubs like subways and bus stations.

Retaliation attacks from bin Laden's al Qaeda followers are very much a concern.

There's been no specific threat and the Department of Homeland Security has not issued a security alert, though Secretary Janet Napolitano said Americans should remain at a "heightened state of vigilance." Under the newly-revamped Homeland Security warning system, alerts aren't issued unless there are specific threats. The State Department released a warning to Americans traveling outside the U.S. about the "enhanced potential for anti-American violence."

Following bin Laden's killing, chatter on the radical websites used by his terrorist network mourned his death, celebrated him as a martyr and vowed to continue al Qaeda's mission despite the death of its leader. And bin Laden's “number two,” Ayman al-Zawahiri, is still out there. Just because one terrorist is dead - albeit the mastermind of the 9-11 attacks– he's still just one man. Al Qaeda is not gone. And there is much hatred against this country among the militant Muslim extremists.

But the "boatload" of intelligence materials recovered by our guys from bin Laden's house-five computers, ten computer hard drives and more than a hundred data storage devices-should give us a leg up in the short term at least as to what al Qaeda might have been planning.

Here’s my question to you: With the death of Osama bin Laden, do you feel safer from terrorism?
Interested to know which ones made it on air?