Historically, what does the killing of Osama bin Laden compare to? 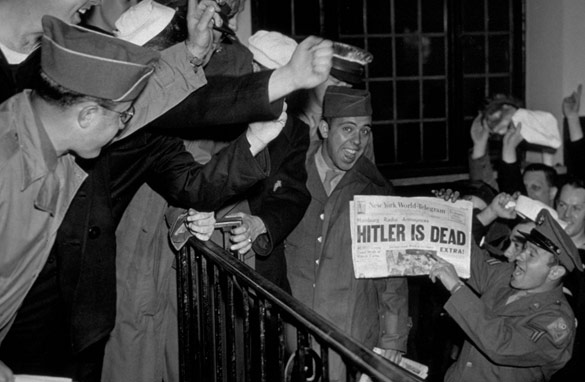 The terror attacks of September 11, 2001 were unlike anything most Americans had ever seen. Three thousand of our own people slaughtered on our own soil. It was an event that saddened and terrified people across this country...but also unified them in a way that they hadn't been since maybe the Second World War.

Sadly, that unity was short lived. We've been a pretty divided nation since soon after those attacks and the partisan politics that have taken over Washington over the past few years have made things downright ugly. But last night, with the news of Osama Bin Laden's death, Americans were once again united. They converged on the streets of lower Manhattan near Ground Zero and outside the White House. There was singing and dancing and flag waving. A sense of victory, but remembrance too.

We haven't seen this sort of patriotism and sense of justice in a very long time. The United States hasn't had much success in the wars we've gotten involved in since World War Two. That was the last one we won outright.

It's been pointed in that both Osama bin Laden and Adolf Hitler were declared dead on the same day, May 1, more than 65 years apart...bin Laden yesterday courtesy of U.S. special forces. Hitler turned a gun on himself when he realized his dreams of world domination for Germany were a lost cause.

Here’s my question to you: Historically, what does the killing of Osama bin Laden compare to?

END_OF_DOCUMENT_TOKEN_TO_BE_REPLACED

What should come next for the U.S. in the war on terror?

News of the death of Osama bin Laden late last night stirred up a lot of emotion in Americans: Shock, joy, sadness, relief. For many, those emotions are being replaced today by questions, like "So what now?"
[cnn-photo-caption image=http://i2.cdn.turner.com/cnn/2011/images/05/02/art.bin.laden.jpg caption=""]
The vaguely termed "war on terror" was launched by George W. Bush in the wake of the September 11 attacks. The goal was to root out terror organizations like al Qaeda throughout the world, but the main target plain and simple was bin Laden, dead or alive.

It took almost 10 years to deliver on that, but we did.

In his address to the nation last night, President Obama said bin Laden's death does not "mark the end of our effort" to defeat al Qaeda.

Secretary of State Hillary Clinton said, "The battle to stop al Qaeda and its syndicate of terror" is not over.

And in a statement released last night, former President George W. Bush said, "The fight against terror goes on."

But what does that mean exactly now that the poster child of worldwide terror is gone? As difficult as it was to find and kill bin Laden, in a way, it was the simplest illustration of progress in this so-called war. But what now? Is the United States truly safer today from terrorism than it was yesterday?

Unrest is running rampant throughout the Middle East. Egypt's Muslim Brotherhood said U.S. soldiers should leave both Afghanistan and Iraq now that bin Laden's dead. U.S. troops will begin partial withdrawal from Afghanistan in July. U.S. troops are scheduled to withdraw from Iraq at the end of this year as part of a security pact with Baghdad. But will this change anything?

Here’s my question to you: What should come next for the U.S. in the war on terror?