Bigger issue for you if election were today: gas prices or Middle East?

Violence rages on in the Middle East. Fighting continues in Libya. In Syria, a human rights group reports that more than 400 people have been killed over the past few weeks.
[cnn-photo-caption image=http://i2.cdn.turner.com/cnn/2011/images/04/26/art.gas.jpg caption=""]
We're still engaged in Iraq, still fighting in Afghanistan. Now everybody is wondering what to do about Syria. At last word President Obama was "considering sanctions." Whatever that means. His strategy and leadership skills are increasingly being called into question, and the chorus of critics is getting louder.

While the problems continue to multiply in the Middle East, many Americans are just trying to figure out how they're going to pay for their daily commute to work. Gas prices are off the charts with predictions now that they could hit $6 a gallon this summer. We're already about 25 cents away from the record high reached in July of 2008. Rising oil prices and the falling value of the dollar don't offer much hope for relief anytime soon.

The president's been talking a lot about gas prices lately, working the topic into speeches in Virginia, Nevada and California last week. He also announced a task force led by Attorney General Eric Holder to seek out fraud and manipulation of gas prices. That's what the politicians do every time gas prices spike. They start looking for an imaginary boogey man.

Today the President wrote a letter to Congressional leaders urging them to repeal preferential tax laws for the oil companies. That'll happen.

House Republicans have announced they are planning to hold hearings and will introduce legislation in response to high gas prices. In an interview with ABC News yesterday, House Speaker John Boehner said high gas prices could cost President Obama re-election.

He might be right. The president's approval ratings are near an all time low.

Here’s my question to you: If the election was held today, which would be the bigger issue for you, gas prices or the Middle East?

END_OF_DOCUMENT_TOKEN_TO_BE_REPLACED

Does GOP have the right idea when it comes to budget? 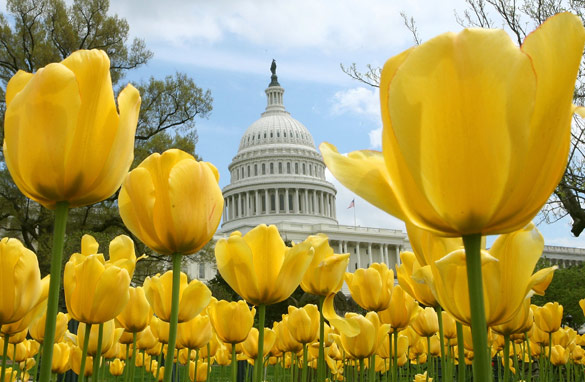 It’s so far, so good for House Republicans when it comes to how to cut the deficits and balance our budget.

According to a new USA Today/Gallup poll, Americans believe the Republican Party is the party better able to handle the budget problems facing this country and to fix the economy. Apparently that six-month-long game of chicken they played with the 2011 budget really paid off for them. At least for now. However, a much bigger battle over the budget and spending awaits. When Congress returns from its two-week spring break and raising the debt ceiling is front and center, we'll see if popular opinion changes.

It might. According to that same USA Today/Gallup poll, Americans are split on whether the deficit plan drafted by Republican House Budget Chair Paul Ryan or the one proposed by President Barack Obama is the right path for the country. Two-thirds of Americans are concerned the GOP plan for reducing the deficit would cut too deeply into Medicare and Social Security. Everyone wants the deficit cut, but no one wants to cut entitlements.

But it's a topic that's not going away. Republican House Speaker John Boehner said in an interview with Politico on Monday that there might not be a deal on raising the debt ceiling unless Democrats agree to rein in discretionary spending and reform Medicaid and Medicare. Things could get very ugly very quickly when Congress reconvenes.

Here’s my question to you: Do the Republicans have the right idea when it comes to the budget?