What should be done about the rash of air traffic controller screw-ups?

The next time you're on an airplane making a landing in a crowded metropolitan area, the thought may cross your mind whether the air traffic controller handling your flight is awake or asleep or watching a movie or doing something besides helping get your flight safely on the ground. Just a thought.
[cnn-photo-caption image=http://i2.cdn.turner.com/cnn/2011/images/04/20/art.air.traffic.jpg caption=""]
Nine incidents are under investigation by the FAA in cities from Washington to Knoxville, Tennessee, to Reno, Nevada, to Seattle, where air traffic controllers reportedly fell asleep on the job and in one case were watching a movie while working.

On Monday afternoon, a plane carrying first lady Michelle Obama and Jill Biden had to abort its landing at Andrews Air Force Base after coming dangerously close to a military cargo jet. The cause: error by a civilian air traffic controller. The FAA said neither plane was ever in any danger but it is launching a full investigation into that incident, too. The National Transportation Safety Board is also looking into what happened.

The last time the air traffic controllers acted up, Ronald Reagan fired all 11,000 of them. The union had decided to strike. President Reagan stepped in and hired nearly 9,000 new air traffic controllers to take their places over the next year. Critics say three decades later, many of those one-time scabs are starting to retire or approaching retirement age, and employee turnover may be part of the problem with air traffic controllers right now. But the funny thing is, I don't recall a rash of sleeping controllers back in the ‘80s.

Here’s my question to you: What should be done about the rash of air traffic controller screw-ups?

END_OF_DOCUMENT_TOKEN_TO_BE_REPLACED

Is Donald Trump playing us for suckers? 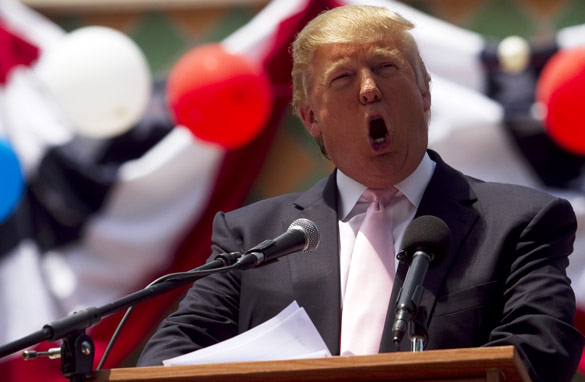 Is Donald Trump playing us?

It's a question Christopher Byron asks in an opinion piece on CNN.com.

If Trump is, it wouldn't be the first time.

Byron wonders if the billionaire real-estate-developer-turned-reality-TV-star is serious about running for president or if he's up to something else. His guess is choice B.

And he may be right. After all, The Donald's flirted with the idea of running for president two times before only to bow out before the race heated up.

This go 'round, he's created a lot of drama around a possible run, using flashy quotes like "Barack Obama has been the worst president ever," latching onto causes like the so-called birther movement and appearing regularly on cable news channels to share his plans for saving the world. He's said he'll announce whether or not he's actually running for president before June, possibly on the finale of his reality show, "Celebrity Apprentice."

See, May is a ratings month in television. The Donald no doubt figures he can spike the ratings for his TV show by announcing his intentions there. He's no dummy.

Trump's possible presidential run is classic Trump. He's perpetually happy to jump in front of a TV camera and spout his opinions. And whether you agree with him or not, you have to hand it to him. He is arguably one of the greatest self-promoters ever.

As Chris Byron's piece points out, Trump has been holding off on renewing his contract with NBC for the "Apprentice" franchise. Driving up his ratings with the possibility of a big announcement like a presidential bid may be his way to get the upper hand in any future contract negotiations.

However it turns out, Byron suggests Trump is taking the country for a ride.

Here’s my question to you: Is Donald Trump playing us for suckers?