How should Congress spend Spring Break?

Congress is gearing up for a two-week spring break that starts this weekend. They must be exhausted. This afternoon, the House passed that much-anticipated $38.5 billion spending cut. It went on to the Senate where it passed as well... now lawmakers can hand it over to the president and look ahead to vacation.
[cnn-photo-caption image=http://i2.cdn.turner.com/cnn/2011/images/04/14/art.bora.jpg caption=""]
Getting out of town might be a good move.

You see, the nonpartisan Congressional Budget Office revealed Wednesday that the budget deal that was made at the 11th hour before a threatened government shutdown - the deal that was touted as creating the largest spending cuts in American history - will really cut only $352 million in spending this year, not $38.5 billion as we were told.

Many of the cuts will have little or no effect on how much money the government actually spends because the cuts come from programs that are outside the reach of the annual budget.

I wonder if we're ever told the truth about anything anymore.

When Congress returns all tanned and rested, the members will have just a few weeks to address raising the debt ceiling. The Treasury Department says the United States will reach its borrowing limit of about $14.3 trillion in mid-May. If Congress doesn't approve a measure to raise the debt ceiling before then, all hell could break loose. Even a hint that it might happen would shake up world markets and knock the wind out of our already weak economy.

Some Republicans insist they won't vote to raise the debt ceiling ... in the name of fiscal responsibility.

Get ready for another game of chicken.

But Congress is going to take two weeks off anyway.

Here’s my question to you: How would you suggest members of Congress spend their two week Spring Break?

END_OF_DOCUMENT_TOKEN_TO_BE_REPLACED

Is the end of the nanny state in the U.S. inevitable? 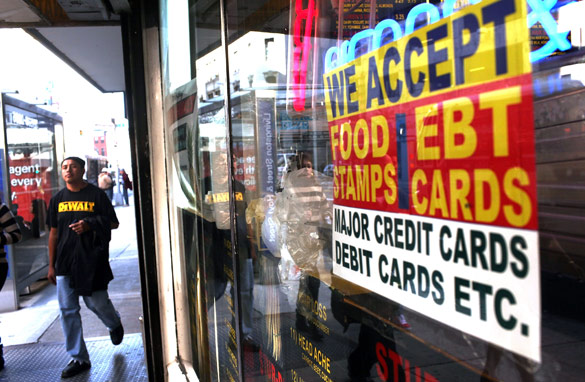 At least one in six people in the United States gets government handouts: unemployment insurance, food stamps, Medicaid, rent subsidies, you name it. And lots of Americans get money from more than one of these programs.

Republican Congressman Ron Paul of Texas says we simply cannot afford all the entitlement and welfare programs we currently have. Paul, one of the few voices of reason in Washington when it comes to our debt crisis, is predicting an end to the nanny state in this country.

"Instead of dealing seriously with our situation, so many in Washington would rather allow the chaos that will ensue when all of the dependent people are suddenly cut off. Better to...tell people the difficult truth that government is simply not capable of managing people's lives from cradle to grave as was foolishly promised."

He's right. Think about it. When many of our ancestors came here generations ago, there were no welfare programs like food stamps or rent subsidies. And yet the poor and uneducated, people from places like Italy and Ireland who didn't even speak English, managed to survive and in time actually thrive and prosper in this country.

Back when we had no federal Department of Education our schools were the best in the world. Now they're among the worst.

Before the Department of Housing and Urban Development, our cities were bustling centers of progress and economic growth. Now many of them are in decay or decline with growing poverty and shrinking opportunity. See Detroit. But when people like Paul Ryan talk about cutting government spending on some of this stuff the Democrats get apoplectic.

Here’s my question to you: Is the end of the nanny state in the U.S. inevitable?