The so-called "birther" movement has been back in the news ever since Donald Trump has started talking about running for president in 2012.
[cnn-photo-caption image=http://i2.cdn.turner.com/cnn/2011/images/04/11/art.obama.jpg caption=""]
Trump says he's not convinced President Obama was born in this country and, therefore, is constitutionally ineligible to serve as Commander-in-Chief. Last week Trump told NBC's Today Show that he's sent his own investigators to Hawaii to dig a little deeper on the Obama-birth issue. Trump wants more proof than what the Administration and State of Hawaii has already provided.

On ABC's "This Week," a chief adviser to President Obama mocked Trump's birther focus and possible run for president in 2012 saying, quote, "That's not leadership. That's kind of sideshow behavior."

But Trump fired back today saying that if he ran for president, he'd be the Obama campaign's worst nightmare.

Former Alaska governor and 2008 candidate for vice president Sarah Palin defended Trump for hiring investigators. She says she believes the president was born here but that, because his real birth certificate is not available, the president may be hiding something.

And whether he ultimately decides to run or not, it's also a great way to get a lot of free publicity for his television show. Which may be what this has been about all along.

But that's not the question. This is: Is President Obama's birth certificate still a legitimate issue?

END_OF_DOCUMENT_TOKEN_TO_BE_REPLACED

Threat of govt shutdown cut $38B: How will serious deficit reduction ever be accomplished? 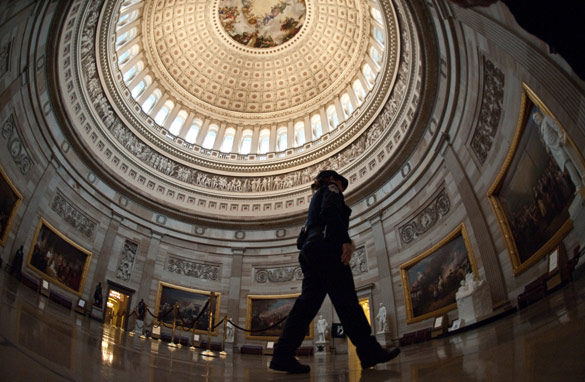 It was close, but less than two hours before the federal government was set to shut down Friday night, Republicans and Democrats came to an agreement on $38.5 billion in spending cuts to the 2011 fiscal budget.

All the expected self-congratulatory back-patting and smiles accompanied the deal. Some even touted the measure as creating the largest spending cuts in American history. But let's not forget the fiscal year is half over already, and they've been putting this off for six months. Let's also not forget that when it comes to the debt crisis in this country, the 2011 budget is only the tip of the iceberg. In the eight days leading up to the vote Friday night alone, our national debt rose by $54 billion. We are anticipated to run a deficit of $1.4 trillion this year, so $38.5 billion is chump change.

The next big fight on Capitol Hill will be over raising the nation's debt ceiling. The Treasury Department says we'll reach that limit of $14.3 trillion dollars around May 16. Starting this weekend, Congress will be on a two-week spring break. That makes a lot of sense. That means when they return, they'll only have about two weeks to hammer out a deal before the country runs out of money. Many Republicans have said they will not vote to raise the debt ceiling under any circumstances. Period.

President Barack Obama is expected weigh in on all of this Wednesday in a speech that will lay out his plan for reducing the deficit. The president will propose cuts to Medicare and Medicaid and call for reforms to Social Security. He will also suggest raising taxes for Americans making more than $250,000 a year.

All things we've heard before. All things that are needed and, of course, nothing's been done. But Congress is going on vacation.

Here’s my question to you: If it takes the threat of a government shutdown to cut $38 billion, how will serious deficit reduction ever be accomplished?