Do you think Hillary Clinton could beat President Obama next year?

A radio host in Southern California named John Phillips wrote a piece in the Los Angeles Times titled "Why Hillary Clinton Must Run in 2012."
[cnn-photo-caption image=http://i2.cdn.turner.com/cnn/2011/images/04/05/art.clinton.jpg caption=""]
In it, he lays out why he thinks Clinton could win the Oval Office this time around. He points to approval ratings– President Obama at just 42% in a new Quinnipiac University poll, Secretary of State Clinton at 66% in a similar poll conducted by Gallup.

Phillips also talks about dissatisfied Clinton backers from the 2008 primaries who never really fell in love with Obama. To quote, "They just fell in line." And Phillips suggests these folks are so fed up with Obama they could be persuaded to vote for a Republican rather than vote to re-elect the president.

But why is Hillary Clinton suddenly so much more attractive as a candidate? Phillips says the military action in Libya was Hillary's "I told you so" moment with "Hillary serving as the realistic, aggressive war hawk and Obama being a not-ready-for-prime-time waffler."

While Phillips might be on to something, the secretary of state has said repeatedly that she is not interested in running for president again.

When Wolf Blitzer asked her in Cairo if she'd want to be president in 2012, she quickly said no.

"I am doing what I want to do right now and I have no intention or any idea even of running again. I'm going to do the best I can at this job for the next two years."

Of course 2012 is still a ways off, and in politics, as we have seen, stranger things have happened.

Here’s my question to you: Do you think Hillary Clinton could beat President Obama next year?

END_OF_DOCUMENT_TOKEN_TO_BE_REPLACED

Should Moammar Gadhafi be allowed to remain in Libya? 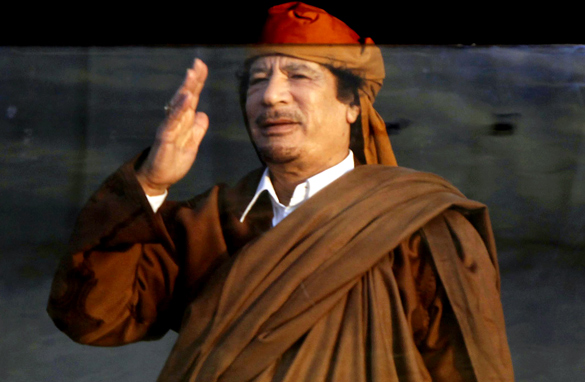 There's little chance U.S. military involvement in Libya will be considered a success if Moammar Gadhafi is not removed from power.

President Obama has called on Gadhafi to step down over and over again. So has the United Nations and the opposition forces fighting Gadhafi in Libya have as well; but that hasn't happened and it doesn't look like it's going to happen any time soon.

A government spokesman for Gadhafi's regime said yesterday that Libya is ready to reform its political system and even hold democratic elections, but that Gadhafi will not step aside. The spokesman said the Libyan people must decide whether their leader for the past 42 years, Gadhafi, should stay in power.

Gadhafi's second son, Saif al-Islam Gaddafi, echoed all of this to the BBC in an interview today. He says sweeping changes are possible in Libya - But he scoffed at the idea of his family leaving the country or going into exile.

He told the BBC, "It's our country you want us to leave? To where? The Maldives? To the Caribbean? We are Libyans."

The Libyan government insists that the Gadhafi regime is not attacking civilians. Nobody believes that. And I don't think anyone is going to buy the "ready for reform" line either.

Here’s my question to you: Should Moammar Gadhafi be allowed to remain in Libya?