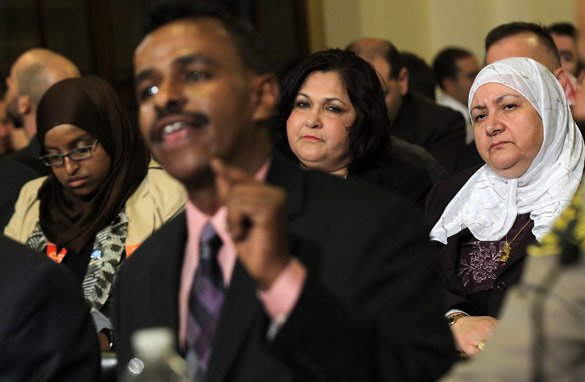 Mark in Voorhees, New Jersey:
Yes, Jack. Then they should hold hearings on the rights of Protestants, Catholics, Jews, Buddhists, the Latter-day Saints, and the Rosicrucians, as well as atheists, animists, and agnostics. It will be a good excuse for them not to do anything about the banks, the lobbyists, climate change, energy, or job creation.

Stephanie:
When Jews are subjected to more hate crimes in the U.S. than Muslims, it's pretty odd that they would have these hearings, except to score political points and seek to protect a specific group's ideology.

Ralph in Corpus Christi, Texas:
Jack, this makes about as much sense as the French wanting a committee to run the war in Libya!

Bradley in Portland, Oregon:
I think they should have hearings on what the TSA is doing to the rights of ALL of us in the airports.

Russ in Pennsylvania:
Why? Are their rights as citizens any different from mine? Or are we expecting the Senate to provide special rights to ethnic groups of one sort or another? Hasn't the government done such a great job of promoting diversity as it is? Or are we all hoping for another four thousand federal laws be promulgated? Why on earth don't we all tell Congress - and the President - to stop minding our business?

Paul in Parry Sound, Ontario:
I thought everybody in America had the same rights, or are the rules about to change?

Lou:
Seriously? Nothing more important to do? Aren't they still working on last year's budget? If they worked for me I would have fired them a long time ago for failure to complete a task. Oh wait, they do work for me.

Conor in Chicago:
Muslim rights? What the hell does that mean? They're citizens, end of story. They have the same rights as me, period.