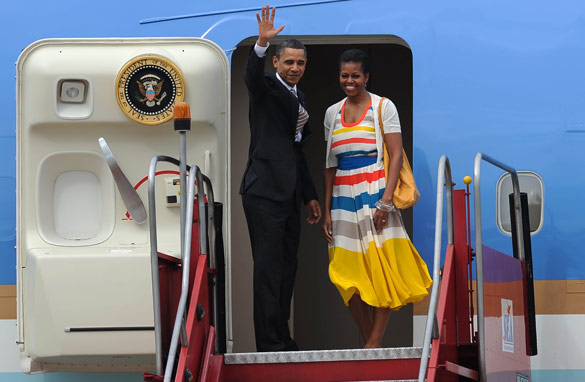 Jason in Denver:
Yes. The president is in Latin America trying to shore up jobs and investment to get us out of this downturn. The president can and is doing his job from anywhere in the world. It's called telecommunications!

Rose:
No, it is not the right time for him to be in Latin America. It appears that Hillary Clinton has taken the lead on the issue in Libya. And where is our Vice President Biden? I think I read that he is holding a fundraiser. It appears that Obama has his priorities in the wrong order. We are now playing a game of follow the leader but who is the leader?

Kirk in Apple Valley, Minnesota:
Why do you ask these kinds of questions? Of course it's the right time for President Obama to go to Latin America, or any other place in the world. Is Libya the only problem he should worry about? Or the Japanese nuclear power plant debacle? Give me a break, Jack.

Ed in Maryland:
Is that where they're attacking next?

Jenna in Roseville, California:
Why not? Is there anything that he can't do from Latin America that must only be done in D.C.? I think not. You forget that we have a president that can walk and chew gum at the same time. I know that this was an impossible task with the last president but it isn't with Obama.

Bob in Pennsylvania:
When you can't stand the heat, get out of the kitchen.

Rich in Texas:
Did Obama go somewhere? He better get those frequent flyer miles on Air Force One in while he can because 2012 is right around the corner and any thing he flies on after that he will be paying for.