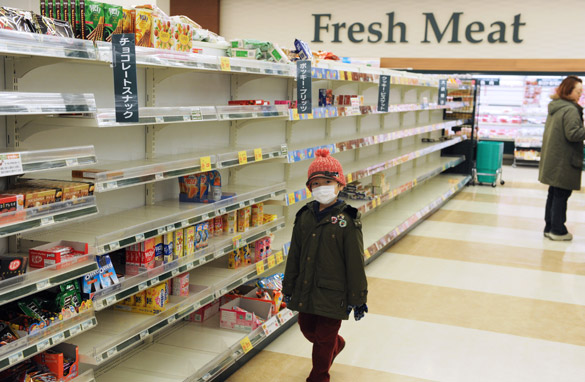 Kim:
Because Japanese culture, unlike all other modern cultures, is based primarily on honor and dignity. Unlike our Katrina disaster, the Japanese don't see this as an opportunity to steal everything in sight. The so-called civilized world can learn much from the stoic Japanese.

Natasha:
The Japanese are resourceful, innovative and disciplined people with a great sense of national pride. While they also have criminals and felons, it is not quite in comparison to the sleaze balls we have in our streets. It was disgusting to watch these scum bags loot stores in New Orleans during Katrina when they should have helped their fellow citizens in need. While watching the devastation in Japan is heart wrenching, it is so refreshing to see the civility of people within the calamity they are facing.

Larry in Georgetown, Texas:
Jack, I was blessed to visit Japan several years ago on business and was told that if I lost my wallet in downtown Tokyo that the person who found it would make it their mission to return it to me intact. These people are very gracious and kind.

Carol:
Sociologists will tell you that the lack of looting is just the result of large numbers of people developing a more orderly society to cope with living in a smaller land mass. Personally, I've always thought it's because they're a more highly evolved race.

Joy:
It's the Japanese culture - very refined, dignified, disciplined and civilized. We should all learn from them. They're the types of people you help out willingly because you know that they'll make full use of any opportunity to get back on their feet.

Richard:
I don't really know. It would be easy to say that they are a very homogeneous society and perhaps in a way consider each other family. In any case they are to be applauded.