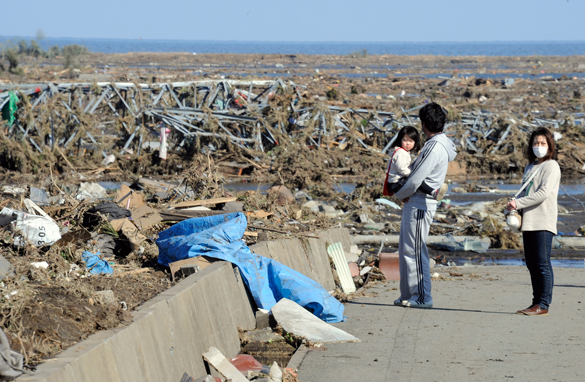 Robert in Formoso, Kansas:
Yes, but not necessarily for the obvious reason. Before building additional power plants, we must first be able to safely dispose of the spent fuel product. Hiding it in tin cans in abandoned salt mines is not the answer. "Out of sight, out of mind" will not work for future inhabitants of the planet.

Tom:
Not at all. If anything, this is a chance for us to learn how to make better, safer nuclear power plants. We learn by failure, and this is something that can help prevent things like this from happening in the future.

Dave in Huntington, New York:
The reason your BS detector is on "red alert" is because the captain of the nuclear powered aircraft carrier that was sent to help, took one look at the radiation levels of returning planes and got his boat outta there ASAP. The intelligent thing to do would be to stop the construction of Fission reactors and work on developing Fusion reactors – they are safe, do not generate toxic waste and use abundant fuel. Our sun is a giant fusion reactor and we bask in that all our lives.

David:
No, it shouldn't, but it probably will. An interesting question recently came up on another forum about the terrible disasters of Three Mile Island and Chernobyl, which was "how many people died?" The answer was zero at 3 mile island, while some 50 died as a direct result of Chernobyl.

Paul:
A popular question, but no, I don't think so. Nuclear power has been around since the 1950's with plants located all around the world. And outside of Chernobyl, there have been no major breaches or catastrophes. How many oil spills have we had? It’s also the only viable, efficient source of energy outside of fossil fuels. Renewable energy is still developing and not there yet. And until it is, we can't do without it.

Jeremy in Albany, Georgia:
Definitely shouldn’t affect new construction on nuclear power plants. The odds of having issues such as Japan is very slim, just like Japan’s chances. Nuclear power is way cleaner and more cost effective than coal burning powerhouses and also put a lot of people to work during and after construction.